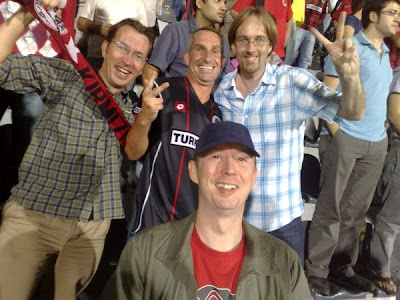 Genclerbirligi 3 - Eskisehirspor 1
After a shaky start to the season (one draw and a loss) Genclerbirligi finally got their act together last night with a well deserved 3-1 victory over newly-promoted Eskisehirspor.
Despite it being Ramadan the bar streets of Kizilay seemed to be doing a decent trade. Trade was clearly up for the Chopin as when I arrived Maniac Kanka Harun and Eski Kanka Jim were doing very well in their quest to increase the profits of the Efes bira grubu.
Those two were at the Chopin purely for the beer and so didn't join myself, Spine, Alpine Kanka Wolfgang, Flying Dutchman Kanka Carlo and The Dartsman Oguz for the match itself.
Didn't take long for Genclerbirligi to silence the fairly large Eskisehir away crowd with some lovely one-twos on a pitch the artificial pitch that I'm starting to think will result in some great football throughout the season.
The first goal came in the seventh minute after a wonderful run down the left that started in our half. Two or three passes were strung together, all within a foot or so of the sideline, with Ergun getting an excellent cross in for Mustafa Pektemek to whack it in. 1-0 up.
The referee then seemed that he ought to join Eskisehirspor but even he couldn't not give us a penalty when Mehmet Nas was taken down inside the box.
Aussie Bruce stepped up, sent it along the ground to the right but Eskisehir's 11 foot tall keeper managed to stop it, luckily Erkan was on hand to follow up. 2-0.
Half-time and it was looking good. Genclerbirligi were playing nice football and if some of the players had a bit more confidence and initiative we could have been a few more up.
Second-half and it was again all Genclerbirligi and at about 60 minutes Aussie Bruce made a brilliant one-touch pass which sent Engin into miles of space down the left. Engin sent in a lovely cross where Pektemek latched onto to put us three-nil ahead. Happy times indeed.
With such a big lead Messut Baykal brought off Aussie Bruce and replaced him with Addo, a defender. A smart move perhaps but it was pretty clear that Gencler haven't used the "3-0 up" training scenario recently. here were all sorts of hassles with no one really knowing what they were doing and this was in part to blame for Eskisehir's only goal of the match.
All up a great win. As I said earlier the artificial pitch looks great and is clearly going to favour those who play a passing game. One thing we have to be wary though is that Gencler may like to play fast attacking football but they had better get their fitness levels up as it was pretty clear they were tiring towards the end.
By Oz Kanka - September 15, 2008