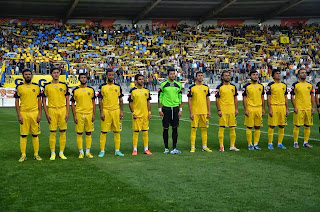 Top of the League Ankaragucu take on Kizilcahamamspor on Sunday in what will be another top of the table clash with the visitors in 5th place. It looked like the game was going to be played at the 19 Mayis Stadium but the Turkish FA have rejected this despite both clubs having come to an agreement. The stadium in which Kizilcahamamspor play at holds 1800 spectators, The Turkish FA have stopped both clubs from making extra revenue which would have been made if the game was played at the 19 Mayis Stadium. Another baffling decision by a football governing body.

Kizilcahamamspor can be counted as a friend of Ankaragucu as both sides have met in friendlies in the last couple of years during the troubled times for Ankaragucu. The game can be described as a local derby with the town only 70km from Ankara. They have shown this season they are capable of fighting  for a play off place having beaten Alanyaspor a couple of weeks back. They lost 3-1 at Altay which is no disgrace with the Izmir club being one of the favourites this season.

Ankaragucu go into the game full of confidence after a fantastic win over Altinordu at the weekend which saw them go top of the table. After a first half where Altinordu were the better team, Ankaragucu grabbed a deserved 3 points thanks to a last minute winner from Levent Kale. Manager Hayati Soldas has some big decisions to make, but decisions he wont mind making with so many on form players to chose from.

Mehmet Cakir will miss the next 6 weeks of the season after picking up an injury in the game against Altinordu. Mert Erdogan, Aydin Toscali and Veli Torun are all working their way back to fitness. Young Onur Atasayer has been filling in for Mehmet Tasci at left back while the later has been on International duty and has been very impressive, it would be very harsh if Onur lost his place but again the Manager will need to make that decision. Then he has Levent Kale who has scored 4 goals in 3 games, he played out wide instead of a more central role in which he is used to, he worked hard but his final ball and decision making from those areas were poor. With Umut Nayir on top form does Hayati go 4-4-2 or stick with his usual formation and play Levent out wide again ?

Talking of Umut Nayir, there has been a lot of doom and gloom for Ankaragucu over the years, but things are looking up, and the club are bringing through some talented youngsters like Gokhan Akkan, Emre Tasdemir, Hasan Ayaroglu to name a few. Young Umut Nayir looks to be a top class prospect and one who could go all the way to the top. He is deadly in the air and his technique for a big lad is fantastic, im really looking forward to watching him develop. Hopefully the club can keep a hold of him.

The game will be played at 3pm on Sunday, and its a game i would expect Ankaragucu to win. No doubting it will be a tough game as all away games are, but if Ankaragucu want to show the rest of the League that top place is theirs, then these are the games we need to win. Im predicting a 1-0 win for Ankaragucu.
By Nady - October 16, 2013