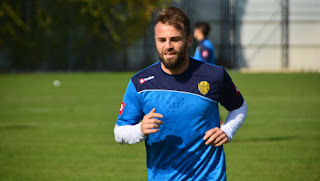 We have spent the last week collecting the votes from Ankaragucu fans on our Twitter and Facebook pages on their 2017/18 Player of the year. After beating off competition from Sedat Agcay who came runner up in the voting, Erdem Ozgenc deservedly was the winner by quite a distance too.

Erdem joined the club last summer from Bursaspor, with some fans disappointed that the club had let Serkan Balci go with Erdem taking his place. After a slow start to his Ankaragucu career, where he looked unfit and carrying a few extra pounds, Erdem has been a start performer both defensively and also in attack where he has 16 assists to his name, which is an incredible achievement at any level.

At 33 years old, Erdem looks like he still has a few years left in him yet at the top level and will be one of the players Ankaragucu will look to keep for their Super Lig campaign.

Umut Nayir, Ilhan Parlak and Kehinde all have Erdem to thank for the amount of assists he created throughout the season, with some top quality crosses into the box from the right hand side. Along with Mehmet Sak they were both a key point in the Ankaragucu attack. Mehmet unfortunately lacked in the defensive part of his game, where as Erdem was key at both ends of the park.

We would like to congratulate Erdem on winning our award and hope he can carry on his excellent form into next season in the Super Lig.
By Nady - May 17, 2018