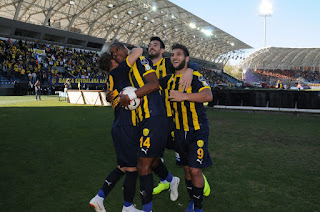 Its almost 6 years since that famous match between Ankaragucu and Konyaspor that erupted into a pitch invasion and massive brawl resulting in a 12 match stadium ban for Ankaragucu. The match at 19 Mayis on a cold December day made headlines all across Turkey and Europe as the scenes showcased the ugly side of Turkish football.

Ankaragucu fans had already seen their club destroyed by certain individuals off the pitch, all it took was some insulting chanting from Konya fans for Gecekondu to break down the fences and run onto the pitch as they tried to get into the Konya end. Konya were awarded a 3-0 win that day and followed it up with a 1-0 win at home later that season as Ankaragucu fans were banned from travelling to the match.

This is the first time the two sides have met since that season and one that was met with anticipation when the fixtures were announced in the Summer. Unfortunately for Ankaragucu, the fans have been banned from travelling to Konya by their Mayor, so the team will have to go out into battle on their own against the enemy.

The Ankaragucu fans can be full of confidence that the team can go there and bring back the 3 points with the form that they are currently on. Another brilliant performance from the team last weekend as they beat Kayserispor 3-1 and move up to 5th in the table.

Having supported Ankaragucu for the last 9 years i would say last weekends performance is up there with the best i have saw from an Ankaragucu team. The 4-2 wins over Fenerbahce and Galatasaray the last time we were in the Super Lig, the 3-0 win over Galatasaray and the 3-1 win at Fenerbahce 2 weeks ago are all contenders. The Kayserispor match though was dominant, and every player that was on the pitch were outstanding and contenders for a man of the match performance.

Its not a coincidence that since the team have been paid and key players have returned from injury has saw them go up another level. There is quality all over the pitch, but when you add the work rate on top of that its the key ingredients needed to build a good team.

Both Antalyaspor and Ankaragucu are having similar starts to the season and there are a lot of similarities between the two sides. Antalyaspor have got rid of all the over paid foreign signings such as Samir Nasri, Johan Djourou, Jeremey Menez and Sandro and have instead went with players who are actually at the club to play football and take the club forward instead of an end of career retirement home.

The work that Ismail Kartal is putting in behind the scenes is paying off and he spoke in his last interview of wanting his team to play football. Ankaragucu fans are delighted not just with the results, but also the performances.

He has Djedje and Faty in the middle of the park doing all the dirty work, but both of them also contribute in the attacking play too. This allows El Kabir, Kubilay and Bifouma to all do their work in the final third.

Special mention needs to go to Kenan Ozer, he has started the last couple of games and again puts in a lot of work, tracking back helping his midfield and defence. It looked at one point that his Super Lig dream was over before dropping down the Lig 1 with Ankaragucu where he became a key player. Kenan has found it hard this season to break into the starting line up, but he has worked hard, remained patient and is now being rewarded for that.

Konyaspor are currently 10th in the league but its always a difficult place to travel to with their volatile fanbase. They have some dangerous players in attack such as Mustapha Yatabare and Adis Jahovic, but Omer Ali Sahiner is out suspended due to being sent off in their last game with Sivasspor.

This is  a match that Ankaragucu can win if they play at the same tempo and level as they have been. A win at Konya will see the team full of confidence going into the big one with Besiktas at home the following game.
By Nady - November 07, 2018