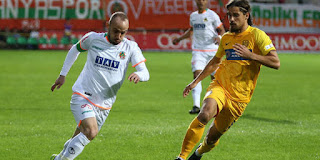 The future of Ankaragucu in the Turkish Super Lig looks extremely bleak at the moment after another thumping at the weekend against Alanyaspor. Its difficult to criticise any of the player or Manager at this stage as the problems off field with previous Management are the main reason why the club are in this position.

The one bit of criticism that came Mustafa Kaplans way at the weekend was the decision to play Mehmet Sak in one of the winger positions instead of Berke Gurbuz. Mehmet Sak is at best an amateur league level player. He cant defend, cant beat players, doesnt have any skill and doesnt score. And it showed during the game where his only contribution was giving away the 2nd goal for Alanyaspor after sloppy play in the middle of the park.

Goals for Alanyaspor came through Bakasetas who grabbed a double, and Djalma Campos who scored a hat trick.

There was noting positive to write about the Ankaragucu performance who now must win next Saturday at home to in form Goztepe. The team are 3 points behind Kasimpasa who are just outside the relegation zone.
By Nady - December 02, 2019