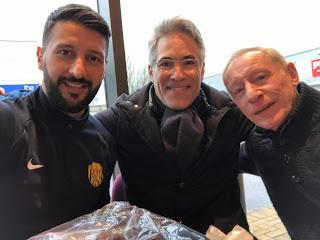 It was a Kanka reunion this time in my hometown in Scotland instead of the Turkish Capital as Jim returned home and was accompanied by Damon who is making his first trip to Scotland. It was great to see both of them again who kindly brought some beautiful gifts for our baby who is due in the next couple of weeks. Thanks to Damon, Jim and Harun for their generosity.

Today saw another huge game for Ankaragücü as they took on fellow relegation candidates Kayserispor. The talk during the week was that Ankaragücü would lift the transfer ban on Friday. Unfortunately that never materialised and there are still 3 files to sort out with Fifa before the ban can be lifted. The club is still hoping it can do that next week.

The players who are here just now again done their part and picked up another valuable point. Aykan Atik who took control of the team after Mustafa Kaplan left midweek brought Denver a Orgill into the starting line up but decided to go with Faty and Sedat instead of Scarione much to the disappointment of the Ankaragücü fans.

Kayserispor got off to a flying start as they took the lead after the first minute but fortunately for Ankaragücü the goal was ruled out for offside after a VAR check.

A minute later Ankaragücü also had a goal ruled out for offside though Ilhan Parlak. Both decisions were correct in the end.

The opening goal came on the 23rd minute as Kayserispor were awarded a penalty after Pazdan was adjudged to have handled the ball in the box. Up stepped Bernard Mensah to make it 1-0 for the home side.

The next big talking point didn’t come until the start of the second half when Cebrail Karayel was sent off for Ankaragücü. Having already been on a yellow card, Cebrail won the ball from Henrique who after 5 seconds decided to have a delayed dive and Cunyet Cakir somehow red carded Cebrail. One of the worst decisions you will ever see.

We have seen so many times this season, despite the lack of quality and all the off field problems this Ankaragücü team never quits. And the same can be said today again as the ten men managed to grab an equaliser. A brilliant cross into the box from Thiago Pinto was met by the head of Alihan Kubalas who beautifully headed the ball past the keeper to make it 1-1.

Kayserispor were awarded another penalty late on but this time VAR saved Ankaragücü and again it was the correct decision.

In the final minute of the game, Oscar Scarione was almost the hero again with a brilliant free kick from the edge of the box but the ball hit the post and it was the final action of the game.

A 1-1 draw and a home game against Kasimpasa next Sunday. Let’s hope we can lift the transfer ban midweek and give everyone a lift.
By Nady - January 25, 2020