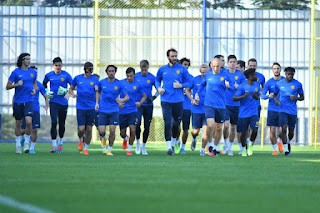 Ankaragucu face fellow strugglers Rizespor this Saturday afternoon in what is another must win match both for the team, and manager Fuat Capa. Two defeats and a draw in their opening 3 games see Ankaragucu at the bottom of the table with last seasons champions Basaksehir.

Before we look ahead to the weekends match, a big congratulations to Yusuf Eren Goktas from the clubs youth academy who was this week called up to the Turkish U17 National team. Eren who is only 16 has been training with the first team and is one for the future.

Saba Lobjanidze, Endr Cekici, Idris Voca, Assane Diousse, Atacan Cankaya were all away on International Duty and will come back into the squad after missing last weeks TSYD Cup match against Sivasspor.

The Sivasspor match was disappointing in more ways that just the result. Fuat Capa changed formation to 3-5-2 and it looked like the team had never played this system before. The defence was all over the place and the team in general created very few chances.

The most disappointing aspect of the performance was the fitness of some of the players. Daniel Lukasic and Assane in particular looked slow and sluggish in the middle of the park and offered no protection for the defence, and nothing in attack. With Voca, Cekici and Atakan all back both players could now find their place in the team under threat.

Sahverdi Cetin and Berke Gurbuz both came on in the second half last week and provided the team with energy and a creative spark that has been missing. Both players look to have big futures ahead of them and will be hoping to see more minutes in the first team.

Torgeir Borven can be an important player for the club, but he needs more support from the midfield and wide areas and hopefully Fuat Capa reverts to the 4-2-3-1 formation which allows the wide players and number 10 to get close to Broven and provide support in attack.

Early team news is that its likely to early for Bolingi to return to the team but he should be available for next week which will be a much needed boost. Ankaragucu have looked better when he is in the team.

With Sarlija back fit it should see him go back into the starting line up alongside Pazdan with Erdi dropping to the bench. Erdi has potential to be a good player in the Super Lig but still has a lot to learn.

The home side Rizespor have started the season with 2 draws and 2 defeats and will be looking to get their first win of the season. The last two games have been draws against Erzerumspor and Alanyaspor who have both started the season well, so this wont be an easy match despite their poor form.

Like Anakragucu and most other Turkish clubs, Rizespor saw a huge turnover in staff over the summer and have brought in players such as Loic Remy and Godfrey Donsah to the team while Key players Boldrin and Samudio are still with the team. Former Ankaragucu player Konrad Mikhalak is also part of the squad.

Ankaragucu won 2-1 at home last season, while Rizespor won their home match 2-0 when both sides met. It looks like it will be another close game on Saturday.

Rizespor have went with a 4-1-4-1 formation in their last two games which have saw decent results against high flying Alanyaspor and Erzerumspor. They will likely line up that way on Saturday. Now lets take a look how Ankaragucu could line up.

Goalkeeper - Ricardo Friedrich - Made a big mistake in the defeat against Sivasspor last week in the TSYD Cup. But its very rare that Ricardo makes mistakes and he should keep his place in goal. Hopefully that is the last of his mistakes and he brings some consistency in goal. Also one of the leaders on the pitch.

Right Back - Stelios Kitsiou - Most consistent player in the team, Stelios will be key again to how Ankaragucu play. His attacking runs from the back while solid defensive work make him indespensible to the team.

Centre Back - Michal Pazdan - Another consistent performer at the back. Pazdan is an agressive no nonsense type defender who leads by example.

Centre Back - Zvonimir Sarlija - Just returned from injury and likely to take the place of Erdi. Sarlija now needs to keep his place in the team and stay fit. He can play with the ball at his feet and has been ok defensively too.

Left Back - Thiago Pinto  - Important player for Ankaragucu in an attacking sense. Puts good crosses into the box and creates chances. Just looking for him to be a bit stronger and tougher on the pitch at times.

Defensive Midfielder - Idriz Voca - Good passer of the ball and one of the key signings the club made over the summer. Lukasic and Assane have failed to impress so far, so a chance for Voca to come into the fold.

Midfielder - Sahverdi Cetin - Im a big believer in if you are good enough, you are old enough. Sahverdi showed in the short space of time last week that he can be an important player for the club and i would start him with Voca who both have energy to allow Alper to play further forward.

Attacking Midfielder - Alper Potuk - With Voca and Sahverdi in the middle of the park it will allow Alper to do his work further forward and help support Borven. He has a lot of ability but needs to show it in the right areas of the pitch.

Wide Attacker - Endri Cekici - Can play as a number ten, or out on the left. With Alper taking up that number 10 position, i would play Cekici in the wide left position to start with. He can come inside and give Ankaragucu an extra player in the middle of the park and allow Tiago to get forward.

Wide Attacker - Joseph Paintsil - Hasnt shown his best yet, but i believe he has a lot of ability and just needs to make the right decisions. His pace is also a big concern for defenders and he could be the gamechanger if he performs to the level which he can.

Striker - Torgeir Borven - Again hasnt shown his best yet, but he needs more support and if you get the likes of Potuk, Cekici, Paintsil around him in support with Tiago and Kitsiou also providing he should score goals.

A tough game no doubt, but one which we must win, otherwise Fuat Capa will be in big trouble as will Ankaragucu.