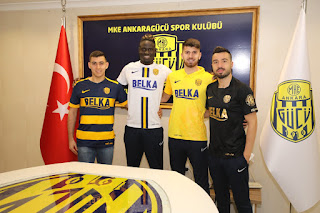 Ankaragucu President Fatih Mert and Faruk Koca both took out loans said to be worth 30 Million Turkish Lira last week in order to lift the Transfer ban. The removal of the ban will give Ankaragucu some hope that they can avoid relegation with the right additions to the team. There can be no repeat of the mistakes made in the Summer transfer window and whoever comes in will need to be better that what we already have.

The club have already announced the signings of 4 new players and 2 Ankaragucu players leaving the club.

Aliou Badji signs a 6 month loan deal from Al Ahly and the powerful striker is already off the mark with 1 goal in his opening 2 games. Badji had successful spells with Djurgarden and Rapid Wien. His success with Ankaragucu will all depend on the service from the wide players and midfield.

Ibrahim Akdag is a 29 year old midfielder who has signed from Erzerumspor. He has started the last two games and looks like a good addition but his discipline could be a concern.

The club have again looked to young players from the Turkish Lower leagues with Ali Kaan Guneren and Embiya Ayyildiz both signing. Ali Kaan is a midfielder from Akhisar who has represented the Turkish National youth team, while Embiya is a striker from Ergene Velemese.

Moving in the other direction Mucahit Can has moved on loan to Lig 2 outfit Hekimoglu who also signed Mehmet Sak in the summer, while Cebrail Karayel has signed with Altay.

Ankaragucu still dont have a backup Right Back or a Number 10 which is the two areas of the team that we have really struggled with. The club are still in talks with Zahid Ghayas but that move is looking very unlikely, and we are now in talks with Ukranian playmaker Denys Garmash who had a spell with Rizespor.

It has also been reported that the club have agreed a move with Angolan winger Geraldo from Al Ahly. His record raises a lot of questions having scored 19 goals in his 10 year career, and only managed 3 games this season. I really hope we arent bringing in more rubbish who will need to be replaced again in the Summer.