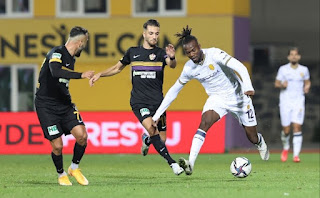 This one will be short and sweet as Ankaragücü were well beaten yesterday by 3rd placed Eyupspor thanks to 2 brilliant goals from former Ankaragücü striker Umut Bulut and Muhammad Akarslan.

Ankaragücü have a very old team with most players over the age of 30, with a few approaching 40. Abdullah Durak is 3 months into the season and is still out of shape. Aatif, Geraldo and Nadir are all in the same boat, with neither impressing when they come on and all in the later parts of their career.

Ulas and Emre both shone midweek in the cup match against Somaspor but neither were given an opportunity yesterday, and the other talent Atakan Dama is yet to play any minutes this season. IMO Mustafa Dalci needs to get rid of the old and unfit wasters and instead inject some youth into the team.

Umut Bulut and Muhammed both took their goals well from distance but the time and space they were both given to shoot from outside of the box was disappointing. At the other end Ankaragücü rarely threatened and will need to up their game next week against leaders Umraniyespor.

We will wait and see what next week brings.