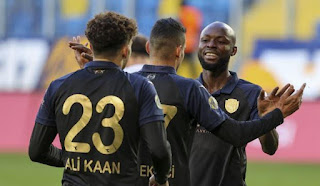 Ankaragucu progressed into the next round of the Turkish Cup after a comfortable 3-0 win over Nazilli this afternoon. Kwabena Owusu was the star of the show grabbing a double on his return from suspension. Despite the result, Ankargucu fans are still frustrated at the direction the club is going in with yet again Mustafa Dalci ignoring the clubs promising academy players apart from a 15 minute cameo from Ulas Yilmaz.

It was another near enough empty stadium in the Turkish Cup with the TFF playing these games mid afternoon when everyone is at work. The few Ankaragucu fans who did make it were unhappy at the usual names of Abdullah, Geraldo and Aatif finding their place in the starting line up. Geraldo has now played for the club for 2 years and hasn't registered a single goal or assist to his name, a quite staggering stat for a winger.

The first half was a bit of a bore fest with neither team taking control of the game. It was Nazilli who came closest to scoring when through on goal but Bahadir made a good save in the Ankaragucu goal.

Into the second half and Gboly and Zahid came on for the useless Geraldo and Aatif. Ishak came on a short time after for Abdullah and instantly Ankaragucu looked a better team.

The opening goal came from the penalty spot when the Nazilli defender hand balled in the penalty box. Up stepped Owusu to make it 1-0. A few minutes later he doubled the scoring after a great cross from Cem which Owusu headed into the back of the net.

Ulas Yilmaz showed nice feet in the box before he was brought down late on and another penalty was awarded. Ishak stepped up this time to make it 3-0.

Onwards the the next round we go as we await to see who Ankargucu ill meet in the draw!