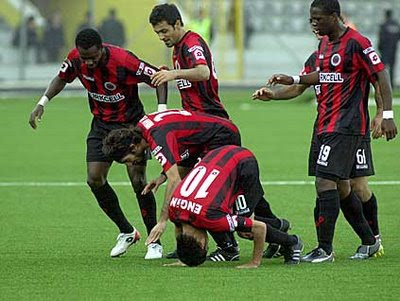 (One of the weirder ways to celebrate agoal. Photo nicked from Milliyet)

I couldn't get out to the stadium today and so I'm at home where I shall be live radio blogging (the reason why Web 2.0 was invented) Hacetepe v Genclerbirligi.

Preamble: Well this one is clearly the match of the round. Forget your Istanbul derbies this is the "Tandogan Derby" between two teams which are pretty much owned by the same man. Not only that, this match is 16th versus 17th and you can't get more exciting than that!

Last year I spoke to former Hacetepe (they were then called Genclerbirligi Oftas) player Miles Sterjovski and he said that Cavcav gave a talk to both teams before the derby. He certainly didn't tell either team to roll over, but he did say to the players not to make any stupid tackles that might result in injuries.

2:03 pm Kick off and I'm a bit late. A couple of minutes in and Hacetepe are playing the attacking stuff. Let's see. I'm not sure what the teams are but Engin seems to be back for Gencler and Kahe and Bruce Djite are up front.

2:10 pm Hacetepe are getting shots on goal. Gencler seem to be trying to attack but just aren't controlling the ball.

2:12 pm From a free kick in a dangerous position Kaha hits it into the wall.

2:17 pm Seems as if Cavcav isn't at the match. He hasn't been well recently. The fact that I even bothered to report this shows how exciting Gencler's play is.

2:20 pm Hacetepe have a shot just out, possibly off the post... The Gencler supporters already seem as if they have given up the ghost.

2:22 pm One annoying thing about this match is that both keepers are called Recep, and the damn commentator won't refer to them just by their surnames. I'm getting confused!

2:23 pm Argh! Kahe has a shot as he is going down and the Hacetepe keeper saves. No foul.

2:28 pm Why am I not surprised that the commentator has just said that the "last passes for both sides are just not making it". At the same time it seems that Engin Baytar (who was dropped last week) is making dangerous moves.

2:31 pm Someone from Galatasaray is watching the match as next week they are away to Gencler. Somehow I doubt he is worried.

A yellow card to a Hacetepe player. Do you like the graphics. This is Web 2.0!

2:39 pm Gencler stuff up. Either Mehmet Nas or Engin miss a fantastic chance after what sounded like a great build up.

Gooool! Burhan scores! It was from a great pass from Engin which left Burhan one-on-one with the keeper. Hacetepe 0 - 1 Genclerbirligi.

Another graphic, er sorry, yellow card for a Hacetepe player. In the meantime Burhan almost got one through for Kahe. Looking better.

2:44 pm Kahe has a shot which the commentator describes as "unbelievably bad".

Murat Kalkan for Hacetepe gets a second yellow. More graphics.

2:46 pm Half time And with that red card the half ends. After a crap start Gencler started to get their act together. Yet again though they don't seem to be able to finish properly. Except for Burhan that is. But as most of the Gencler fans know, Burhan is the sort of player who one week is brilliant and the next is about as much use as a craving for steak at a Hindu restaurant.

A few minutes into the second half and another yellow card for Hacetepe. They really ought to calm down.

3:10 pm Kahe misses another "unbelievable chance". The commentator is saying that if we lose points out of this match it is Kahe who should take the blame.

3:12 pm Taking advantage of being a man up Gencler are really putting on the pressure. Time to convert that pressure!

Aussie Bruce scores! Burhan sends in an excellent cross and Djite heads it in. Hacetepe 0 - 2 Genclerbirligi.

3:18 pm Seems as if the Galatasaray bloke in the stands watching this is actually their coach Skibbe.

Engin is given a yellow.


3:21 pm Engin is taken off and James Troisi comes on.

3:25 pm Kahe is coming off... not sure who is coming on. I should make a graphic for these things... maybe not.

The fellow who came on for Kahe, Kemal Akbaba scores! Troisi sent a great pass to Nas who sent another on for Akbaba. This is only the second time Akbaba has come on for Gencler. Hacetepe 0 - 3 Genclerbirligi

3:34 pm Burhan is taken off. He has had a great game. Again, I have no idea who came on. Seems like his name is Caner.

3:40 pm Not long to go and both teams have used up all their substitutes.

Silly, silly, silly. A Hacetepe player gets a direct red. They are down to nine men with just a minute or two left.

3:49 pm Peep, peep, peep. And that's it. Gencler are out of the relegation zone, at least until the results of other matches are known. As for Hacetepe, they may well be doomed.

Postscript
Results of the other matches played at the same time.
Antalyaspor 0 - 0 Eskisehirspor
Gaziantepspor 0 - 0 Kayserispor