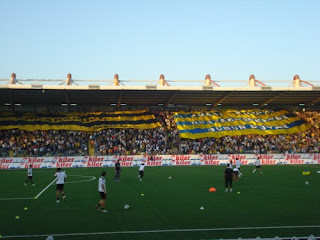 Ankaragucu travel to Istanbul on Saturday where it will be top against bottom.
The question again will be what Ankaragucu side will turn up, will it be the one who were so poor in the first half against Eskisehirspor, or the second half team which were so unlucky not to win the game ?

Fenerbahce have been on excellent form this season, although the last couple of weeks haven't been at there best. Last season Ankaragucu won 4-2 in the cup at home, and also won 2-1 at home in the league. Fenerbahce won 6-0 in Istanbul in a game Ankaragucu will want to forget. The game was one of many at the centre of match fixing allegations.

The home side have so many talented players such as Emre Belzoglu, Miroslav Stoch and the Brilliant Brazilian Alex to name a few. If Ankaragucu are to take anything from the game then they will need to stop Alex as everything goes through him. They also have a strong defence with Joseph Yobo and Goalkeeper Volkan the experience at the back.

Ankaragucu have to go into the game and show the same determination and attacking play that they showed in the second half at the weekend. Turgut Dogan and Ergin Keles may come into the starting line up after impressive performances when they came on. There can be no repeat of the school boy mistakes that we have seen so often and the reason Ankaragucu find themselves at the bottom of the table. Tonia Tisdell looks set to miss the match due to injury and will be a big loss.

Fenerbahce have only scored 4 goals in there last 5 games so this may be the best time to meet them. Or maybe its wishful thinking that Ankaragucu who only have one win to day can take anything from Fenerbahce who are top of the league. Anything can happen in football.

Good news is the Gecekondu and Anti X will be in Istanbul to cheer the team on.
By Nady - November 30, 2011