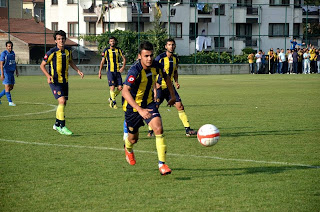 Ankaragucu got off to a winning start on their first pre season game of the 2013/14 season. The game was played in Bolu where the first teams training camp is located. Manager Hayati Soldas was very happy with the teams performance as they created many chances and all the players got a good run out.

Ankaragucu will play against Sakaryaspor tomorrow night as the team continue to be put through their paces. In news off the field, President Yiginer spoke today saying he believes the club can sell 20,000 season tickets. Its reported that the club have already sold 9,000 season tickets to date.

Yiginer also spoke to the clubs Tribune leaders and said Ankaragucu will have a new image and no more trouble on the terraces of Stadium bans. Lets hope that is true as the club has lost too much money for crowd trouble in the past.
By Nady - August 15, 2013