Ankaragucu news round up ! 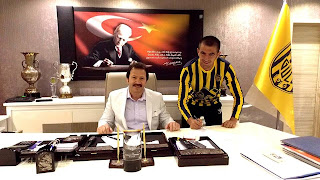 Ankaragucu youngster Mert Pamukkaya has become the latest youth player to sign a professional contract with the club as he signed a 3 year deal. Not all good news though as the club have been handed a 1 point deduction for the coming season due to debts owed to Robert Vittek and Ariel Broggi.

The club have stated the will appeal the deduction as they continue to fight against the financial crisis at the club. Timur Ozgoz has been linked with a move to Sivasspor after his move to Antalyaspor fell through, its almost certain he wont be wearing the Ankaragucu jersey this coming season.
By Nady - August 07, 2013