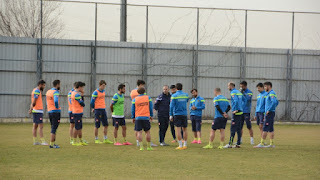 Firstly i would just like to pass on my condolences to the families who have lost someone in the Kizilay bombings today and also the the injured, we wish you a speedy recovery. Its a sad day for the Ankara and Turkey in general.

As expected this week, Kemal Kilic was shown the door after a string of disappointing results and performances which now leave the clubs playoffs hopes in jeopardy. The club have moved swiftly to appoint Hayati Soydas as the new coach who will now serve in his second spell as manager of Ankaragucu. He was also in charge of the club at the start of the 2013/14 season until he was shown the door just before Christmas due to a run of 4 games without a defeat.

Looking back at the teams performances during his first spell, the team scored plenty of goals but we also have to remember we had a very strong side that season with Umut Nayir and Levent Kale striking up a good partnership then you had Mehmet Cakir, Mehmet Erdem, Volkan and Emre Tasdemir all excellent attacking players.

Hayati Soydas will return to the club at a very difficult time and it will be interesting to see if he can make a difference to this side and help them reach their potential. Their was more bad news regarding off field problems this week with Bochum sending a letter to the club demanding outstanding payments for Stanislaw Sestak, they have given the club a deadline of next week to pay the money or they will make a complaint to to UEFA. This will more than likely lead to another point deduction.

It was also reported today that members of the Ankaragucu management team will face a court trial due to accounts being missing from 2010 period. It will be interesting to see how that develops.

Sundays match will see Ankaragucu host Bucaspor in a game that will be played behind closed doors due to the 1 match stadium ban imposed by the TFF due to bad language from Ankaragucu fans. Its difficult to say whether this will be an advantage or disadvantage for the team at this stage. Their is no doubting the Ankaragucu crowd are the 12th man and play a huge part in the clubs progress, however the players may feel relaxed due to current form and less pressure from the demanding fans.

Bucaspor are on a decent run themselves at the moment as they look to fight against relegation. They have only lost 2 of their last 10 games and won again at the weekend with a 1-0 win over Amedspor. It will be interesting to see how Hayati Soydas lines up with his first team. Hopefully we will see an attacking line up that will excite the fans. The defence and Goalkeeper have done their job this season as they have the best record in the league. The midfield and attack need to step up and play their part too, our top scorer is Omer Bozan with 6 goals which tells you everything you need to know.

All the updates will again be on our Facebook page starting about 1pm just before kick off.
By Nady - February 17, 2016