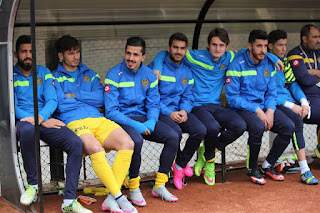 Toothless, spineless, gutless are just a few words to describe this Ankaragucu team and management at this present moment. Another defeat against excuse my language a shite team who had only won 1 of their last 10 games. Despite making big changes to the team, Kemal Kilic has shown why he has managed 147 teams in his 147 years of managing. How he manages to keep getting new jobs is beyond me.

So in came Onur, Harun, Sertan and Sedat as Kemal looked to save his Ankaragucu career with a win. According to reports he was told on Monday that if he fails to win this match he would be sacked. It doesn't matter because even if he goes we will just appoint some other useless pish manager who has been sacked from every club he has been at. Reports suggest Hayati Soydas will take his place, funnily enough he's already been sacked by Yiginer 2 years ago.

It has to be said, both Harun Aydin and Onur Atasayer can hold their heads high as they both performed very well and can count themselves unlucky to be on the losing side. Thats where the positivity finishes. Each and every other player need to take a long hard look at themselves. Part of me wishes we never lifter the transfer ban, because all the new players apart from Goksu and Omer have been woeful.

Ankaragucu had 1 decent chance in the first half when Harun played in Omer but his shot was tipped round the post by the goalkeeper. It was the usual sideward passing by Ankaragucu with nothing for the excellent travelling fans to cheer about.

In all the years of watching football, i have never seen a team more incapable of making easy through passes or creating chances. I would understand if we were playing against Super Lig teams, but these are players who to be honest aren't very good that we are playing against, and thats not being disrespectful. Its an awful league, with awful teams.

The second half was as bad as the first half, Ankaragucu had a goal ruled out for offside, and then 1 decent effort saved by the Aydin goalkeeper. Game looked to be heading for a 0-0 draw until a moment of madness from Sedat Bayrak, he failed to clear the ball in the box and ended up fouling his man with the referee pointing to the spot, up stepped Seckin Getbay who made no mistake with the penalty to make it 1-0.

It stayed that way, while Manisaspor won 1-0 at home against Tepecikspor. They are now 12 points ahead of Ankaragucu who in danger of even making the playoffs with this kind of form.
By Nady - February 14, 2016