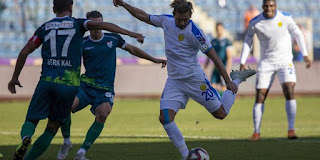 Ankaragucu secured their place in the next round of the Turkish Cup, but it was far from the kind of performance you would expect against a team sitting just outside the relegation zone in the 4th tier of Turkish football.

Ismail Kartal rang the changes from Sundays match with Fenerbahce giving all the first team players apart from Bakary Kone a rest. Due to the injuries to Yalcin Ayhan, Alihan Kubalas and Thomas Heurteaux it meant Kone was the only fit centre half.

There was an opportunity for certain players to put themselves in contention for the weekends match with Kayserispor. Sadly no one grabbed that opportunity apart from the two outfield youth products who were both excellent. Kaan Uykur and Ender Aygoren did themselves proud with their performances that will have delighted Ismail Kartal. Ender in particular put in a spirited performance and showed good quality on the ball. He was unlucky on a couple of occasions not to have put himself on the scoresheet.

The only goal of the game came from the penalty spot. Anton Putsilla saw his strike hit the hand of one of the Erbaas players in the box and the referee pointed to the spot. Up stepped Cerci who fired the ball into the roof of the net to make it 1-0.

Youness Mokhtar played his first game since returning from injury and was disappointing in the first half. He started to come into the game more in the second half and will be pleased to be back in contention. Mahmut Akan was dreadful and i would be very surprised if we see him playing in the future.

Overall a poor performance but the team are through to the next round and it will be interesting to see who we get in the draw.
By Nady - October 31, 2018