When Ghana came to Ankara! 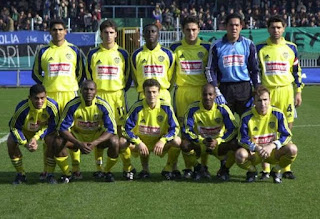 Ask any Ankaragucu fan the best foreign player to have played for the club, and there is a very good chance you will consistently get the same answer. Augustine Ahinful was the golden boy amongst the Ankaragucu support for the 6 years he spent with the club over 2 different spells in the early 2000s.

Having spent most of his career in Switzerland and Portugal, Augustine signed with Ankaragucu at the age of 26 and instantly showed his quality by doing what all good strikers do, putting the ball in the back of the net on a consistent basis.

Before Augustine arrived in the Turkish capital, there were 3 other Ghanaian players who were with the club. The troubled but hugely talented Nii Lamptey had a short spell at the club but things didn't work out for either party. Stephen Baidoo was a mainstay in the middle of the park and Ohene Kennedy another forward player and fans favorite who had the fans on the edge of their seat with his style of play.

Although Augustine, Baidoo and Kennedy wouldnt play in the same team due to Baidoo moving to Samsunspor when Augustine arrived, the trio would make their mark at Ankaragucu and go down in history as 3 of the top foreign players to play for the club.

Baidoo was a big strong typical african midfielder who was also comfortable on the ball, he spent 7 years at the club playing over 100 games and scoring 40 goals.

Onene was a skillful wide player who created a lot of goals particularly for his fellow countryman Augustine. He would play 106 games for the club scoring 38 goals and also become a favorite.

Before the signing of Augustine, Ankaragucu were a mid table club with the odd battle against relegation. Powerful, fast, skillful and an eye for goal, Augustine fired Ankaragucu into 4th and a place in Europe where they would come up against Atletico Madrid. In his first 2 full seasons Augustine would score 20 goals and 17 goals respectively for unfashionable Ankaragucu.

His performances didn't go unnoticed as Turkish giants Trabzonspor signed him on a free transfer much to the disappointment of the Ankaragucu support. Big things were expected from Augustine who had joined one of Turkeys biggest clubs at the peak of his career. The move would however turn out to be one of disappointment as Augustine was plagued with injuries during his 2 year stay at the club and failed to become a regular in the starting line up.

A move back to Ankaragucu for a second spell at the club was confirmed 2 years later with the Ankaragucu support hoping that their hero could recapture some of that previous form. Unfortunately for both Ankaragucu and Augustine his second spell was inconsistent as he continued to pick up injuries and never found that same form from his first spell.

Their are many great moments from Augustines Ankaragucu career but the most memorable one is his goal away at Besiktas where he beat his man on the half way line and then from 45 yards lobbed Thomas Myhre in the Besiktas goal. A goal like that against your main rivals is always going to go down well with the fans.

Baidoo and Kennedy will always be well thought of by the Ankaragucu fans, but Augustine was special. He was a fantastic talent who should have succeeded at a higher level had it not been for injuries. That said, he had an excellent career especially in Ankara and will be forever remembered as the best foreign player to play for the club.
By Nady - October 18, 2018