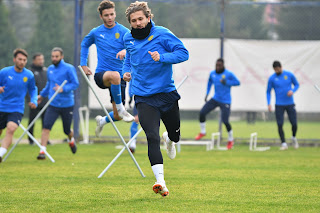 Ankaragucu host leaders Basaksehir on Monday night as they look to bounce back after a disappointing 4-2 defeat at Bodrumspor in the Cup midweek. Its 4 games since Ankaragucu have won a game and they dont come tougher than Basaksehir. The team will take some encouragement that Sivasspor went to Basaksehir last week and won 2-1.

Ismail Kartal has almost a full squad to chose from with players returning from injury and suspension. The likes of Moulin, Hertauex, Bifouma, Mokhtar and Faty are all back in contention for a place in the starting line up.

Ankaragucu again will have to play this home tie in Afyon as they Yenikent pitch is still unplayable so the TFF have decided to send Ankaragucu 4 hours away to play another home game. Baring in mind the game is on a Monday night, the expectations for Ankaragucu fans to travel that distance in December is ridiculous.

The midweek game was an opportunity for some of the Ankaragucu fringe players to impress and make their case for a place in the starting line up. Unfortunately none of them grabbed that opportunity and instead Bakary Kone showed once again that he cant be trusted and shouldnt be anywhere near the team. He gifted 2 goals to Bodrumspor a team who play in the 3rd tier of Turkish football. Alessio Cerci again showed flashes of his ability but its almost as if he has come to Ankaragucu for an easy life.

Basaksehir are 4 points clear at the top and have quality all over the pitch. Edin Visca in particular is their key player who makes things happen. He can create and score goals and will be the dangerman pulling the strings in midfield. They also have Emmanuel Adebayor up front who has only scored 2 goals this season but still a danger in attack. At the back Basaksehir have the best defensive record in the Super Lig having remarkably only conceded 6 goals.

Having just missed out on the title the last two seasons, this will be the best chance for Basaksehir to be champions of Turkey. They have had a settled team for the last 3-4 years and added small pieces each window. Having a settled team is certainly showing the benefits as they dont have the best individual players, but to date have the best team who work very hard for each other and are very well organised under Abdullah Avci.

Ismail Kartal will need to pick his players up from the disappointing results over the last couple of weeks and get Ankaragucu back to playing the way they were against the likes of Fenerbahce and Kayserispor. Attacking play with quick wing play and hard work in the middle of the park. Hopefully we see the return of Bifouma, Erdem and Kenan as there presence has been missed.

Jim will have the report on Tuesday morning and will post the meeting instructions for the game.
By Nady - December 07, 2018