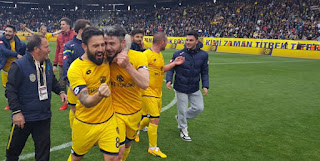 With all incoming players, it was inevitable that there would be a couple of players moving in the other direction. Sadly one of the key players during the double promotion campaign for the club Kenan Ozer is on his way out as he looks set to sign with Gazisehir. Kenan played a huge part in the Lig 2 campaign coming up with numerous key moments including his equalizer in the match with Tuzlaspor. We would like to wish him all the best with his new club!

Also on the move is Kubily Kanatsizkus who after an unsuccessful loan spell and only 1 goal moves back to Bursaspor.
By Nady - January 30, 2019