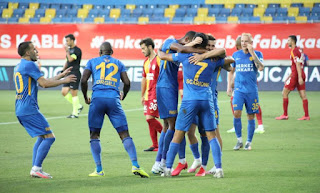 Its do or die as they say on Sunday as Ankaragucu host Anyalyaspor knowing that only a win will give them hope of staying in the Super Lig and other results must also go their way.

Ankaragucu gave themselves a lifeline last weekend with a 1-0 win over Galatasaray thanks to an Oscar Scarione penalty. Sadly the performance has been overshadowed again by off field problems with Gerson Rodrigues sent home from the squad due to punching Ante Kulusic in training.

According to reports, this was due to Rodrigues questioning Ibrahim Uzulmez in which Ante Kulusic spoke up and it ended up in a heated argument before Rodrigues threw the punch. The Luxembourg International has been a key player for the club since signing in January but his attitude and behavior seems to be an issue at any club he plays for.

The Ankaragucu management team met this week with the team who refused to forgive Gerson, and the decision was made to terminate his contract. The team will also be without Dever Orgill for Sundays match due to suspension.

This leaves Ibrahim Uzulmez with the decision of giving Gelmin Rivas his first start for the club, or playing Ilhan Parlak. Hopefully Gelmin is giving the nod as Ilhan just isnt good enough to lead the line with his poor control and touch and link up play.

Stelios Kitsiou was rumored to have signed with Antalyaspor after news broke yesterday on Twitter from various Turkish media outlets, but both the player and club have denied this. Kitsiou has been one of the teams most important players and the timing of the news is far from ideal an thankfully has been rubbished.

Antalyaspor are one of the form teams in the Super Lig since football has resumed. Only 1 defeat since they returned with wins against Besiktas, Alanyaspor, Rizespor and a draw at Trabzon shows how difficult a task it will be for Ankaragucu. The experienced Adis Jahovic will be the man to watch as he is one of the best finishers in the Super Lig. Ankaragucu actually tried to sign him in January but due to being unable to lift the transfer ban until the last day they missed out.

With Antalyaspor having nothing to play for, and Ankaragucu fighting for survival the extra motivation should be there for the team. They have also asked for Gerson to be removed from the team, its now up to them to show that it was the correct decision. Konrad Mikhalak and Saba Lobjabidze will be key players in attack and will need to take any chances that come their way.

At the back for Ankaragucu Pazdan and Kulusic were back to their best last weekend and will have Kitsiou and Pinto on either side. Ricardo Faty has come in for a lot of stick from the Ankaragucu support at times, but there is no doubting his effort and work rate. Another big performance will be needed if Ankaragucu are to take all 3 points.
By Nady - July 17, 2020