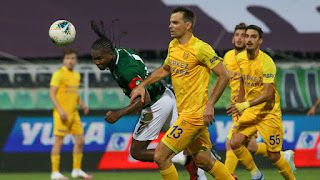 Ankaragucu only had pride to play for on Saturday as they had already been relegated the week before. Ilhan Parlak scored the only goal of the game in a 1-0 win for the team from the Turkish Capital. The club will now find out in the next couple of days if they will be relegated to Lig 1 along with Kayserispor and Yeni Malatyaspor. The TFF will decide if relegation stands this season or extend the league to 21 teams due to the coronavirus.

There was a debut for Turkish U19 International Fatih Tultak who played at left back which is an unnatural position for the young centre back. Milos also made only his 2nd start for the club and made the team of the week. Gelmin Rivas came on and set up the winner for Ilhan Parlak while Ender and Ferdi Imdat from the youth team both got run outs.

The question that needs to be asked, is why we persisted so much with the likes of Ricardo Faty and Dever Orgill, when Milos and Rivas contributed more in the limited amount of games they played. So many wrong decisions this season from choosing managers (5 in total over the season), team selections and signings.

Hopefully we have some good news to bring you later this week in regards to relegation. In other news Dever Orgill has reportedly agreed a pre contract with Sivasspor who qualified for the Europa League.
By Nady - July 28, 2020