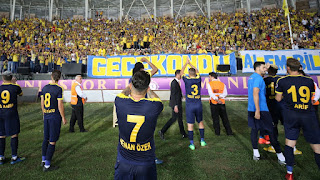 The two form teams in the Turkish Super Lig come head to head tomorrow night as Ankaragucu travel to league leaders Besiktas in what will be the toughest game under Hikmet Karaman to date.

Besiktas currently lead the table by four points ahead of rivals Fenerbahce and also have a game in hand. They have only lost 1 of their last 11 which was strangely against a poor Kasimpasa side. Ankaragucu will be hoping Besiktas have another off night tomorrow in Istanbul as they look to continue this impressive form under Karaman.

We are starting to run out of words to describe the incredible job Hikmet Karaman has done at Ankaragucu. The impossible task of taking a team bottom of the league and 7 points from safety when he took over and facing a difficult run of games.

He has managed to galvinise the squad and brought discipline while making Ankaragucu hard to beat. The team again looked solid at the back against Genclerbirligi last weekend and every player gave 100 percent while wearing the jersey on the pitch. These are the two most important but simple changes Karaman has made to the team since coming in.

With 5 games remaining tomorrow nights match is the most difficult with most Ankaragucu fans happy if the team can even take a point. Its certainly within the teams capabilities of causing an upset but Ankaragucu will have to be at their very best, while hoping Besiktas have a rare off night.

The defence will again be key to Ankaragucu taking anything from the game with Sarlija likely to partner Kulusic again with both Kitsou and Pinto taking up the wing back positions. Karaman may even look to go to a more defensive formation with Pazdan coming in to a back 3 but that would in turn upset the balance in midfield that has served him so well.

Ibarhim Akdag does all the dirty work to allow Endri and Alper Potuk play further forward, but the later 2 will likely spend most of the night defending with Besiktas expected to have the majority of possession. Borven and Saba are both doubts for the game through injury which means Paintsil will take up one of the forward positions with the likes of Badji, Emre Gural and Geraldo fighting it out for the other 2. The more likely option will be Emre Gural and Endri playing further forward and Karaman bringing an extra defensive midfielder into the middle of the park.

Besiktas have a lot of quality in midfield and attack with the likes of Rachid Gezzal who has most assists in Super Lig this season, Vincent Aboubakar who is in running for player of the season but will face a late fitness test, Atiba Hutchinson who still at the age of 38 is one of the best players in the Super Lig and partners Ozyakup in midfield. Cenk Tosun picked up an injury last week and will miss the match but they still have Cyle Larin and plenty of attacking options.

Its important Ankaragucu find the right balance and keep things tight in the early stages. The longer the game goes on and Ankaragucu frustrate Besiktas the better chance they have of maybe taking a point back home. Losing Saba is a blow as his speed on the counter attack is a huge asset in these games.

Hopefully we will be celebrating a positive outcome tomorrow but its going to be a really difficult game.