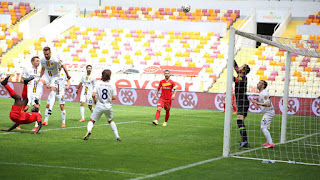 Ankaragucu are in danger of being drawn back into the danger zone after a disappointing week picking up only 1 point against relegation rivals Denizlispor and Yeni Malatyaspor. With injuries and suspensions mounting the clubs transfer policies in both Summer and January are coming back to haunt them.

Borven, Badji and Atakan were again ruled out with injury and Sarlija was suspended. This meant Pazdan and Voca both came back into the team while Saba started up front interchanging with Endri and Paintsil.

Losing both strikers has become a big problem for Ankaragucu as neither Paintsil or Saba can play in that role. They lack the hold up play and being able to play with their back to goal, or the football brain that Borven has. They also lack any physical presence and Emre Gural cant be trusted to start games.

Ankaragucu did start the match brightly with Alper and Endri both combining well in the opening stages. Endri set up Apler after 4 minutes who shot high and wide, and then 2 minutes later brilliant play from Endri set up Saba who yet again shot straight at the keeper when he should have scored. This is becoming a bit of a habit with Saba.

Adem Buyuk set up Ahmet for Malatyaspor who shot straight at Korcan from the edge of the box but at this stage Ankaragucu looked the livelier of the sides.

The next big chance came again for Ankaragucu  after 33 minutes when Kitsiou broke in to the box and smashed his shot of the post with the Greek again having a good game.

Into the last 5 minutes of the half and thats when Malatyaspor started to dominate. Fofana cut inside Kitsiou before shooting on goal but Korcan tipped the ball round the post. From the resulting corner former Ankaragucu forward Kubilay headed against the bar and Fofana volleyed the rebound over.

Into the second half and surprisingly Hikmet Karaman didnt bring either Emre or Embiya on with Ankaragucu badly needing someone in that forward position.

Ten minutes into the second half and Malatyaspor took the lead, a lovely cross from Karem for Adem Buyuk who headed beyond Korcan to make it 1-0 for the home side.

Only 5 minutes after coming on substitute Geraldo was shown a red card for a stupid tackle and now has more red cards (1) than the total number of goals or assists he has combined. His signing in January along with Badji is really looking like bad business at this stage.

Ten minutes later Malatyaspor sealed the 3 points as they danced around the Ankaragucu defence, the ball finally made its way to Tetteh who beat Pazdan and put the ball past Korcan to make it 2-0. Pazdan was really poor for the goal and looks a shadow of his former self.

Paintsil scored a late consolation from the penalty spot to make it 2-1 but was also yellow carded and misses another game through suspension.

Next up is Gaziantep on Thursday and Karaman will have to do it without Geraldo or Paintsil and potentially Borven, Badji and the missing man Atakan. Another issue Ankaragucu has is the Goalkeeper position with neither Korcan or Freidrich good enough for the number 1 spot. Its time for Mert Topuz to be given his opportunity. The good news is Sarlija should return from suspension.