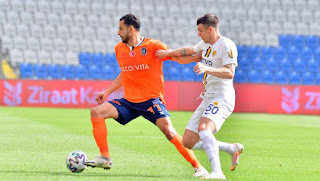 Ankaragucu hit the self destruct button as they have so many times this season leaving Hikmet Karaman with and almost impossible job to keep the team in the Super Lig with 3 games remaining. Ankaragucu move back into the relegation zone after Kasimpasa won 3-0 at home to Alanyaspor and Malatyaspor vs Kayserispor finished 1-1.

Freidrich came into the team to replace Korcan after his mistake last week and both Paintsil and Saba returned to the starting line up. Borven and Badji remain out but the later is expected to be back for the Fenerbahce match at the weekend.

Ankaragucu started the match brightly and were awarded a penalty on the 8th minute after Bolingoli was adjudged to have hand balled the volley from Kitsiou. The referee however consulted with VAR and overturned the decision.

Minute later Atilla headed over his own bar from a Basaksehir corner at the other end just before Ankaragucu took the lead.

A brilliant move down the left as Pinto picked out Alper on the edge of the box who volleyed his shot on goal but the ball came back off the post, Paintsil was first to react as he calmly controlled the ball and curled it past Volkan to give Ankaragucu the lead.

Five minutes later a great move involving Paintsil and Alper who saw his shot tipped onto the post by Volkan. Im going to use this save as an example of how valuable Goalkeepers are to their team. Volkan used all of his height and got his finger tips to the ball which would see his team go onto take all 3 points.

Two minutes later Aleksik saw his headed effort easily saved by Freidrich before Chadli saw his shot hit the side netting as Basaksehir started to pile on the pressure. Basaksehir were having the majority of the possession in the first half but Ankaragucu were defending well and looking dangerous on the counter attack.

Into the 2nd half and Basaksehir looked like a team fighting to stay in the Super Lig while Ankaragucu showed once again why they are in the relegation zone. The lack of intensity or basics like failing to keep the ball played right into Basaksehirs hands.

The equaliser came on the 63rd minute as Aleksik volleyed his shot from the edge of the box into the bottom corner. He had plenty of time to shoot but there wasn't a lot of power in his shot as Freidrich dived but couldn't reach the ball.

Basaksehir looked like the only team that would go on and win the game as Ankaragucu were creating nothing in attack and losing the ball at every opportunity. On the 84th minute Freidrich missed a ball at a Basaksehir cross and Junior headed over the bar.

A couple of minutes later Ankaragucu hit that self destruct button again as we have so often seen this season. Kitsiou tried to beat Junior in his own box, but the Brazilian took the ball from him and placed his shot past Freidrich. This is coming back to my original point with Volkan Babacan early in the game. Freidrich dived toward the ball but his arms were too short to reach the ball and couldnt stop it from going into the back of the net.

A big problem this season for Ankaragucu has been the form of both Korcan and Freidrich. Neither are making big saves to win the team points. We cant lay the blame solely at both of them as the squad takes collective responsibility, but if Ankaragucu are to progress next season they need to sign a Goalkeeper or 2.

Kitsiou has been one of the most consistent performers in the team, but you cant make those kind of mistakes in the Top Division.

Ankaragucu had 1 more chance to share the points at the end as Alper volleyed another effort at the back post but Volkan made a good save.

Basaksehir take all 3 points and it now looks very bleak for Ankaragucu who face Fenerbahce, Kasimpasa and Alanyaspor in their last 3 games.