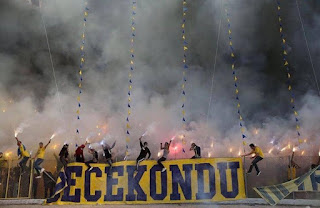 Tomorrow night is quite simple for Ankaragucu, win and we go into the last match of the season on Saturday still with a chance of staying in the Super Lig. Lose and we will be playing in Lig 1 next season. Saturday night at Fenerbahce was just another in a long line of disappointments for the fans as the team suffered an agonising 95th minute defeat thanks to more amateur defending.

Ankaragucu had started the match so brightly and could easily have been 3 or 4 up against Fenerbahce. But poor finishing and the failure to convert chances into goals allowed Fenerbahce back into the match and eventually take all 3 points back to Istanbul.

The starting 11 for Ankaragucu have done well in the first 45 minutes of the last few games, but as soon as the team makes changes in the 2nd half the drop off in quality is apparent. Attacking midfielders such as Alper Potuk and Endri Cekici are replaced with the likes of Assane, Voca and Lukasik who are all defensive minded. Up front we only have 1 fit striker in Badji who isn't even fit enough to play 90 minutes due to his recent injury.

And then we have the wide players like Saba and Geraldo who continue to waste any chances they have and havent delivered an acceptable performance in months. Paintsil has been better of late and just needs to be more consistent with his numbers.

Alper Potuk who was outstanding again at the weekend against his former team scoring the goal for Ankaragucu and was involved in every positive forward move came off injured midway through the second half. Its unclear whether he will be available for tomorrows game and would be a huge loss if he is out.

Kasimpasa will take encouragement from their last 2 results, a 3-0 win against Alanyaspor, and 1-0 win at Erzurumspor now puts them in a strong position to stay in the Super Lig. Two clean sheets in those matches too will give them confidence.

They have some good players in Yusuf Erdogan, Haris Hajrodinovic, Isaac Thelin and former England International Danny Drinkwater. Fode Koita and Armin Hodzic are both out due to injury.

Ankaragucu won 1-0 the last time the two sides met this season and will be hoping for a similar outcome tomorrow night.

Kasimpasa will likely go with the 4-2-3-1 formation and we will take a look below at how we think Ankaragucu will line up.

GK - Freidrich - Unlucky to be on the losing team against Fenerbahce and a much better performance from the Brazilian who made some good saves. Only issue is his Shoulder injury and will likely face a late fitness test.

RB - Kitsiou - At fault for another goal at the weekend and really needs to deliver a big performance. Kitsiou has been outstanding for Ankaragucu but he will be unhappy with his last 2 performances.

CB - Sarlija - Form of late has been unacceptable but we don't have any other options with Erdi at fault for a goal only a minute after coming on against Fenerbahce and Pazdan has been poor too.

LB - Pinto - Should come back in for Atilla at LB who worked hard but just gave the ball away the whole game against Fenerbahce.

CM - Ibrahim - Took another knock and will face a fitness test too. Lets hope he recovers in time as he has become a very important player.

CM - Endri - Need more from him in the final 3rd of the pitch in terms of assists and goals. Has 2 games left to become a hero if he can help keep the club up.

CM - Alper - We are waiting on news to see if he will be fit, but for the most important game of the season im hopeful to see Alper on the pitch.

RW - Paintsil - We need goals and assists from Paintsil. His work rate has been good of late but needs to add those goals to his game on a more consistent basis.

LW - Saba - Its between Saba and Geraldo for that final place in the team. Saba has done it in the past and we need a big game from him.

CF - Badji - The only fit striker, hopefully he can manage the 90 minutes as Ankaragucu looked much stronger when he was on the pitch on Saturday against Fenerbahce.