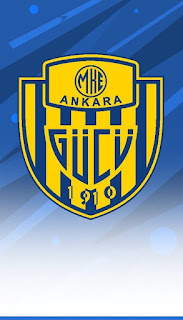 Ankaragucu pulled out all the stops last night against promotion rivals Erzurum to remain 3 points clear at the top of the league.

The Ankaragucu defence was in sparkling form, especially in the last 15 minutes of the match when they were reduced to 10 men.   They resisted wave after wave of Erzurum attacks, but it has to be said that the Erzurum accuracy was wayward for the most part.

The first real action and the only goal of the match arrived in the 21st minute and it was a goal worthy of winning any match.     A corner was sent over from the right by Erdem to the far post where Yusuf had ghosted in unmarked to power in a bullet of a header inside the left post.

5 minutes before the break and Ankaragucu had Akin to thank for saving at point blank range and then the rebound was deflected clear by a defender.

Owusu did score just before the half time whistle, but his goal was correctly ruled offside.

The 2nd half was mostly waves of attacks by Erzurum with the Ankaragucu defence holding firm, but then 15 minutes from the end Yasin was shown a 2nd yellow for holding an Erzurum player after he had avoided the tackle.

Still the Ankaragucu defence held firm and tried to initiate counter attacks.   5 minutes to go and Ariyibi made a great run down the left from near the half way line, cut inside the box and his shot smacked the outside of the right post and out.

Into time added on and that’s when the supporters frustrations behind Akin’s goal boiled over and some ugly scenes resulted.

Akin saved a shot near the left post on the goal line, and before he stood up he was hit by a missile from the crowd behind the goal (probably a cigarette lighter  ?!).    That was the cue for more missiles to be thrown, including bits of plastic chairs.

I have to say that it was not as serious as the similar incident at the Ankaragucu v Konya match a few years ago in which Damon and I were caught up in and which caused the match to be abandoned at half time and Ankaragucu receiving a hefty punishment.    However, there is absolutely no excuse for throwing pieces of plastic chairs with sharp edges  or any other type of missile at players.

All credit to Emircan of Erzurum who tried to appeal to his supporters to stop, but at one stage he was also hit with something   !!

Erzurum will no doubt receive a fine and stadium ban when the TFF meets to decide on what action to take   !!!

Back to footie, and Ankaragucu will be in action again next Saturday 5 March when they will be at home to Bandirma, another team in the top 5 who are looking to compete for promotion.   Hopefully Eren and Aatif will be fit to be included for selection.