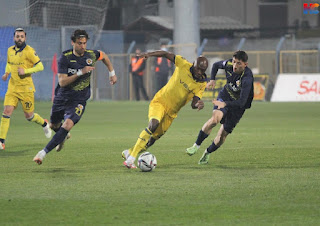 Since Faruk Koca said Ankaragucu will win the league despite failing to lift the transfer ban, the team has failed to win a game. A home defeat against Istanbulspor last weekend was followed up last night with a turgid 1-1 draw at Menemen.

Im not going to go into much of last nights match as it was the usual slow, turgid boring nonsense from a Mustafa Dalci team. Menemen took the lead early in the first half through Aydin after another silly error from Sinan and poor goalkeeping from Akin.

Ankaragucu equalised late on when we were awarded a penalty and Ishak stepped up to slot the ball home into the back of the net.

As soon as the Ankaragucu team was named, i mentioned in our Kanaka Group Whatsapp group that we wouldnt win this match. How can any coach think that a team full of slow players and out of shape players could take anything from this match?

We have a 33 year old striker in Eren who is only effective in the penalty box and cant move or run. You decide to surround him with a midfield of Abdullah, Huseyin and Zahid? Abdullah cant complete 90 minutes due to his age and shape, Huseyin hasnt been fit since the day he signed for the club, and Zahid who we had high expectations for just hasnt delivered.

In defence you have an ageing Erdem who is still effective from set pieces and crossing, but struggles to get up and down the pitch, a hopeless Yasin and then two centre backs in Sinan and Yusuf who will provide a mistake a game at the moment.

Behind that defence we have Akin who somehow keeps his place in the team, while Mert who was man of the match in his only performance fails to make the bench.

Onto the substitutions, lets talk Geraldo first. 37 games 0 goals, 0 assists for a winger??? Show me another winger in world football with worse statistics than that? But he still gets minutes ahead of the talented Atakan Dama? Why? Because the teams Sporting Director is Emre Yildiz who is his manager like many other players in this team. Cem is another one who came on and simply isnt good enough.

We have Arif Emre Eren, Ulas Yilmaz, Atakan Dama, Furkan Ceylan, and Mert Topuz all talented young players ignored by Yildiz and Dalci. Instead we have to watch unfit old men put in these performances every week.

Dont let the table fool you, Ankaragucu may be top, but we had 3 games where the opposition were reduced to 10 men. We now have some tough games coming up with injuries and suspensions mounting too.

Even if Ankaragucu do go up, which players are Super Lig ready? Potentially Owusu and Murat? Apart from them no other player can play every week in the Super Lig. This means we will need to sign a minimum of 12-15 players, maybe more if we do go up.