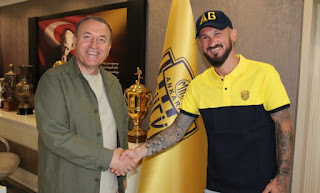 Ankaragucu made their 3rd signing of the summer after adding Gaziantep right back Oguz Ceylan to the squad on a free transfer. Oguz was backup to former Ankaragucu defender Stelios Kitsiou and the signing has raised a few questions from the Ankaragucu support. We will wait and see whether Oguz was brought in as backup or if he will be first choice.

Of those players who will depart Erdem again has been a fantastic servant for the club with both him and Yusuf playing their part in 2 promotions to the Super Lig. Owusu has been sent back to Qarabag due to disciplinary problems, and Murat Ucar was a surprise as he was seen as a player who could play multiple positions.

In other news, the club have pulled out of a move for Brighton striker Danny Wellbeck. Faruk Koca said they agreed a move with the player but agents got involved and due to complications the club decided against the signing.

Sinan Osmanoglu has signed a new 1 year deal with the club, again which is a bit of a surprise. Sinan was a decent player in Lig 1, but he is not good enough to play in the Super Lig. We saw what Gerson Rodrigues done to him and how he performed against better quality players.

The club are also in talks with Metz midfielder Ibrahim Amadou who also spent time at Seville and Norwich. He was very highly rated at Lille before making a big money move to Seville.

Faruk Koca has also today confirmed the club will move back to 19 Mayis stadium and we should hear news shortly on when construction of the stadium will begin.