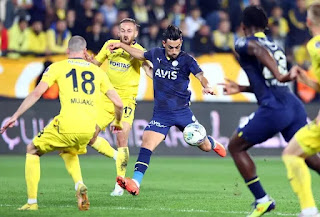 Usually after a 3-0 home defeat i would have a lot to say and criticism of the team. But last night we saw one of the most blatant cheating refereeing performances in Turkish football. Of course Ankaragucu could have done better in parts of the game especially Gokhan Akkan in goal who was awful, and in the final 3rd of the pitch. But the biggest problem was the referee.

Omer Erdogan went with an attacking team and handed a full debut to Kevin Malcuit, while Jese got his 2nd start for the club.

The game was only a minute old when Fenerbahce were awarded a free kick. The ball was swung into the box and headed back across goal, Michy reacted first with a questionable high foot as he knocked the ball past Gokhan who should have done better. An awful start for Ankaragucu as Fener took the lead after only 1 minute.

Then came another big talking point, Irfan blatantly elbowed Emre on the side of the face. The referee waved play on and Fener broke forward with the ball. Irfan had a go from long range and the ball was straight at Gokhan but he made another big mistake and the ball went into the back of the net to make it 2-0 Fener. Firstly Irfan should have been booked and it was a free kick to Ankaragucu, the fact they have VAR and didnt even check is a disgrace, and secondly Gokhan should have saved the shot.

Altay then made a great save from a deflected shot and Ankaragucu were giving Fenerbahce a lot of problems in attack.

Into the 2nd half and again the referee was at it with another terrible decision. Samuel handed the ball in the box and it should have been a penalty. Again no VAR check and no penalty. At this stage it was obvious what was happening.

Fenerbahce got a 3rd in the last minute through Rossi, another that Gokhan should have done better, but it was game over and Ankaragucu are now in the relegation zone.

They travel to Giresun next Monday night in what will be another must win match.