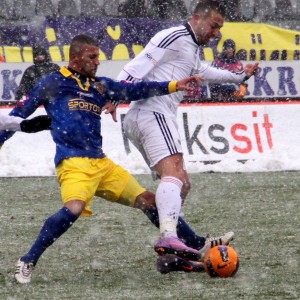 Ankaragucu midfielder Abdullah Keseroglu is the latest player to leave the club due to unpaid wages. Keseroglu is owed 100,000 Euros by the club and is back home in Germany receiving treatment for a hamstring injury picked up against Besiktas.

The German born Turk joined the club two years ago from VFL Osnabruck and was loaned out to Bugasspor. It wasn't until this season that Keseroglu broke into the first team due to players leaving the club. Only Abdullah Keseroglu, Mehmet Cogum and Aydin Toscali stayed with the club when everyone else left so for that reason i would like to thank Abdullah on behalf of the Round ball in Ankara for his loyalty.

Good luck with the rest of your career !