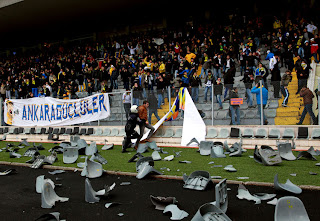 Ankaragucu travel to Konya this weekend for the final game of the season as they take on a Konyaspor side who are looking to make the playoffs. Ankaragucu were relegated last weekend in a disappointing 3-0 defeat at home to Denizlispor in a match that saw four players sent off for the side from the Turkish capital.

We all know what happened the last time these two sides met in Ankara, violence erupted in the stands of the 19 Mayis stadium in Ankara as fans of Ankaragucu entered the park, smashed up seats and tried to attack the visiting Konyaspor fans. The club were handed an 8 match stadium ban, with a further 3 matches due to trouble at an away match in Tavsanli.

Konyaspor officials made the decision to ban Ankaragucu fans from traveling to Konya, a smart decision as their has been a lot of tension between both sets of fans in the last couple of years. Its disappointing that this young Ankaragucu side has had to play so many games this season without the backing of their own fans due to crowd trouble.

Ankaragucu will have to do without, Timur Ozgoz, Bilal Gulden, Serkan Sirin and Bilal Gundogdu through suspension, so their may be outings for youngsters Emre Tasdemir, Batuhan Gulcan and Batuhan Aykildiz. This should be a game that the youngsters should go out and enjoy themselves without being under pressure. Its also a chance for some of the players to say farewell to the club with a host of them being out of contract at the end of the season.

Konyaspor have been on an excellent run of late with only 1 defeat in last 8 games and that was last week against Sanliurfaspor. It will be a huge ask for this Ankaragucu side to take anything from the game especially when they are missing start striker Timur, but it would be nice to see Ankaragucu putting a stop to Konyaspor's playoff chances.

The game will take place at 1530 Turkish Time and will again be shown live on TRT Anadolu , tune in and cheer on Sari Lacivert as this will be your last chance to see them play for at least 1 year !
By Nady - May 10, 2013