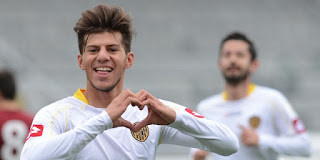 According to reports in the Turkish media, Ankaragucu midfielder Bilal Gulden has reached an agreement with Super Lig side Antalyaspor. The 20 year old German born midfielder along with Timur Ozgoz have been the best players for Ankaragucu this season. After an inconsistent start to the season, Bilal has impressed with his performances this season. I actually recommended him to the head scout at Rangers.

Bilal came to Ankaragucu from Ankaraspor nearly 4 years ago and broke into the first team last season. He has scored some important goals for the club and any money he receives he sends back to his sick Mother in Germany. His move to Antalyaspor will bring in regular money and more stability and he will be able to look after his Mother.

A big future lies ahead for Bilal, his physical presence, stamina and technique are all key attributes that will stand him in good shape in the Turkish Super Lig. His contract comes to an end at the end of the month but due to him being under 21 Ankaragucu are set to receive up to 350k Turkish Lira.

We at the Round ball in Ankara would like to thank Bilal for all his hard work and wish him all the best in his move to Antalyaspor !
By Nady - May 11, 2013