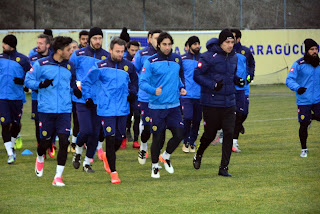 Ankaragucu return to league action this Sunday after the winter break where the players enjoyed their training camp in Antalya. A tough trip to Erzerumspor awaits Ankaragucu who will be hoping to bounce back from their disappointing 2-1 defeat at Adana Demirspor in December.

Santiago Mele, Doka Madureira and Cheikhou Dieng have all left the club with no new players being singed as of yet in the January transfer window. Tonia Tisdell and Kibong Mbamba are both fit and have returned to the squad after missing out on the first have of the season due to injury. Tonia in particular will be a huge boost to the club and a key player moving into the second half of the season.

Both sides met in the first game of the season in Ankara with the scoreline 0-0, as both sides failed to take their chances with Hamza Younes and Ilhan Parlak in particular guilty of poor finishing. A lot has changed since then as both sides were playing their first competitive game which included a host of new players. Ankaragucu have went from strength to strength, blowing away anyone who stands in their way, with stunning wins against Rizespor, Eskisehirspor, Giresunspor and Umraniyespor respectively.

Erzerumspor on the other hand find themselves 1 place outside of the playoff spots and have improved as the season goes on. After a stuttering start, they are starting to find consistency and are unbeaten in their last 6 games, having drew 3 and won 3. Those results have all came against difficult opposition and Sundays match will be a real test for Ankaragucu.

Hamza Younes will again be the key player for Erzerumspor with the Tunisian striker having scored 7 goals from 15 games this season. The big striker is strong in the air and will always find himself in good positions. He can be a bit erratic at times with his finishing but will be the man that Ankaragucu will need to pay attention too. Gokhan Karadeniz is another danger man with the former Altinordu and Goztepe forward a proven scorer in the Turkish lower leagues.

Ismail Kartal will again be expected to go with the team that has repaid his faith shown in them this season. The left back position is still an area of concern with both Mehmet Sak and Ferhat Kiraz disappointing in defensive duties.

It will be interesting to see if Ismail decides to start with Tonia or if he finds himself on the bench. It will depend on his fitness levels as he has missed the last 6 months due to injury. Lets hope for another Ankaragucu win as the 2nd half to the season is going to be a tough challenge!
By Nady - January 19, 2018