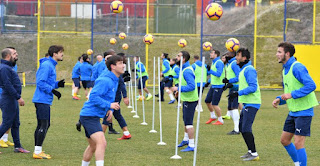 The positive vibes are back at the club after months of disappointment and chaos. Being and Ankaragucu fan, you become accustomed to the highs and lows, but there looks to be a spring in the step of all the players and the fans are as always doing their bit and creating a fantastic atmosphere at both home and away games and demonstrating why they are considered some of the best and most loyal fans in Turkey.

Saturday afternoons match is another relegation encounter as Ankaragucu travel to bottom of the table Akhisar. After a hugely successful campaign last season avoiding relegation and winning the Turkish Cup, Akhisar have struggled with the demands of playing in the Europa League and the Super Lig. They have also failed to strengthen the team and they now face a massive task of avoiding relegation.

Elvis Manu is the danger man in attack for Akhisar but the flamboyant forward has again struggled with consistency and his decision making in the final third. Manu is a the type of player that will beat 3-4 players but then put his shot wide of the target. That said, on his game he can be a fantastic player and will need to be watched.

Since their 3-0 win over Fenerbahce at home, Akhisar have went 8 games without a win in the Super Lig and if they are to have any chance of survival, then Saturdays match is a must win for them.

Ankaragucu will need to avoid being complacent and build on their fantastic 3-0 win over Kasimpasa on Monday night. The new players have all settled in very well and hit the ground running which now gives the team hope that they can stay in the Super Lig.

Its still early days, but Pazdan, Boyd, Kitsiou, Moke, Boyd, Sacko, Orgill all look like they will be important players for the club. Oscar Scarione and Hector Canteros still need to work on their fitness before they can be considered regulars.

Brice Dja Djedje again showed why he is the teams most important player with another excellent performance on Monday night. His drive, work rate and leadership added to his fantastic ball retention brings others into the game who feed off his energy.

Mustafa Kaplan has taken a bit of stick since coming back to the club as manager, but he played a big part in Monday nights victory with his tactical awareness bringing off Scarione for Moulin when Kasimpasa were dominating the game. That move changed the game and from there on Ankaragucu were the better side.

Lets hope Ankaragucu can make it 2 wins in a row, but it wont be an easy match against another side fighting for survival.
By Nady - February 14, 2019