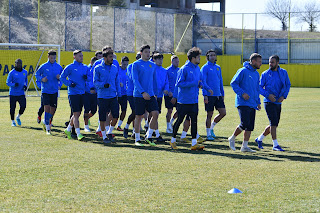 A huge game awaits us this weekend as Ankaragucu host Erzerumspor who are also fighting for their survival in the Turkish Super Lig. The visitors have sold out their away allocation of 1024 tickets which is a fantastic achievement from the travelling support.

Ankaragucu will have to do without key player Brice Djd Djedje for this one as he is suspended due to his sending off at Akhisar. Thibault Moulin and Hector Canteros are both in contention to take his place with Moke moving back into midfield as Pinto should return.

Erzerumspor lie 2nd bottom but their league position doesnt paint a full picture. They have played very well in a lot of their games but failed to take points with luck going against them on many occasions. A fantastic 4-2 win against Sivasspor at the weekend and 1-1 draw at leaders Basaksehir the week before will see the team going into the game full of confidence.

Taylan Antalyali is their key player in midfield. A great passer of the ball and supports the attack with late runs into the box. He has scored 4 goals this season and will be the player to watch along with new signing Samuel Edouk. The Nigerian signed in January from Kasimpasa and has always been a player i have admired.

Ankaragucu have 2 clean sheets in their last 2 games bagging 4 points along the way. The performance against Kasimpasa was an excellent overall performance, but the team were lucky to come away from Akhisar at the weekend with a point. On Sunday Ankaragucu will need to put in a better performance if they want to take anything from the match against Erzerumspor.

Michal Pazdan, Ante Kulusiz and Stelios Kitsiou have come in and improved the defence and made Ankaragucu more solid. The middle of the park lacks that bit of creativity and Mustafa Kaplan will be hoping Oscar Scarione can find match fitness as he could be the missing link between midfield and attack.

Denver Orgill has had an impressive start to his Ankaragucu career and will lead the line again in attack. His work rate is first class and he has the quality to score goals if the right service is given by the wider players and midfield.

A huge game for Ankargucu at the weekend in another sold out Eryaman Stadium, atmosphere should be excellent. Come on AG lets go!!!
By Nady - February 21, 2019