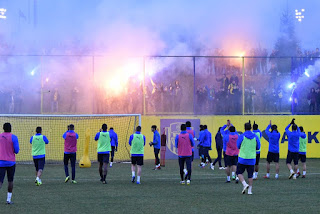 Monday nights home match with Kasimpasa is the biggest game of the season so far for Ankaragucu as its must win for the hosts if they are to avoid relegation. Since the return after the winter break Ankaragucu have had a couple of tough games against the likes of Galatasaray and Trabzonspor with more than half a team unavailable for selection.

Ankaragucu can now call upon all of the 12 new signings for selection as well as the return of El Kabir who has apologised to Mehmet Yiginer and his team mates. It looks like Mondays match will come to early for Hector Canteros and Oscar Scarione who are still behind in terms of match fitness.

Although Ankaragucu lost 1-0 to Trabzonspor last weekend, they came away from the match disappointed that they didnt take a share of the points. The team put in a brilliant performance and had it not been for a poor refereeing decision Ankaragucu would have taken at least a point. Stelios, Orgill, Moke and Boyd all impressed on their debuts, while Aydin and Sacko came on and showed promise too.

Kasimpasa had a great first half of the season, but they have only won 1 of their last 6 competitive matches. Mbaye Diagne was suspended for 4 of those games and then signed for Galatasaray which has been a massive blow for the Istanbul side. Diagne the top scorer in the Super Lig was vital to the way Kasimpasa played and is impossible to replace. They still have some good players especially Trezeguet who can score and provide goals and is lightening quick.

With Kasimpasa struggling for form and some signs of improvement at Ankaragucu, we could be in for a bit of an upset on Monday night. The Ankaragucu support turned up in their numbers at the clubs training ground yesterday with flares and smoke bombs in a show of unity and to help raise the spirits. For some of the new players this would have been a new experience for them and it looked like they enjoyed the occasion.

Eryaman stadium is the venue for Monday nights game and the feedback after opening night was very positive. The stadium is perfect for creating an excellent atmosphere with the stands being close to the pitch and it looks like it will be full again on Monday night with a big crowd expected.
By Nady - February 08, 2019