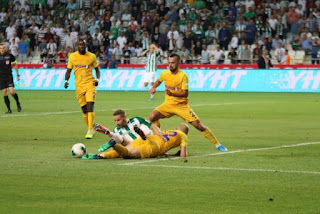 Before we look ahead to this weekends home match with Kayserispor, there are a couple of bits of transfer news to bring you up to date with. As you know, Ankaragucu still have a transfer ban and it will unlikely be lifted in time to register any new players for this weekends match. The club are confident that it will be lifted before transfer deadline day which would give the team a much needed boost.

Adama Traore who was released by Goztepe and had spells with Basel and Vitoria Guiamaraes has been training with the squad for the last 4 weeks and will be offered a deal if the ban is removed. The 29 year old Left back has been capped 13 times for the Ivory Coast and can also play at center half and left midfield. Kevin Bemanga is another who has been training with the team, the 21 year old Frenchman has been playing in the 3rd tier in Spain and is also hoping to win a deal with the club.

Journalist Ertan Guler also today claimed that Aminu Umar and Emrah Bassan are both close to signing with the club. Umar is a winger from Osmanlispor who had a successful loan spell with Rizespor last year and would be an excellent signing for the club. Emrah is a midfielder who plays with Erzerumspor and previously Galatasaray.

Moving onto the weekends game, and Ankragucu will host Kayserispor at Eryaman stadium this Saturday night. The club today announced season ticket prices much to the anger of the Ankaragucu support as despite all the problems off field and no new transfers, the management have decided to introduce the most expensive season ticket prices. They range from 600 Lira in Gecekondu to 3000 Lira in VIP. A massive own goal by management as the stadium will likely now be half full at best with many fans boycotting due to price, and also against management.

Ankaragucu produced a fantastic performance last weekend in Konya where they gave everything and defended magnificently for 90 minutes. It will be a tough ask for the team to repeat that performance again as even the top teams would struggle to keep a clean sheet with that type of pressure on their goal for the full game.

Thiago Pinto may be available this weekend as he has another week of training under his belt and will be a big boost when he returns. The team at the moment picks itself for obvious reasons, but they need more from Aydin and Ilhan if they are to take anything from the game. Its hard to criticise anyone after last weekends performance, but Ilhan in particular gave the ball away too often and provided nothing for Orgill up top. Aydin was really disappointing with his final ball and flattered to deceive which he so often does despite his talent.

Orgill looked a frustrated figure up front on his own, and even when he had brief opportunities he was wasteful with his final ball and link up play. A lot of that can be down to the amount of defensive work he had to do off the ball.

Kayserispor are looking for their first win of the season too after a disappointing 1-0 defeat at home against Alanyaspor last weekend. They have had a big turnaround in players this summer with the likes of Chery, Deniz Turuc, Kana Biyik and Varela leaving, while former Ankaragucu player Djedje, Paulo Henrique, and Aymen Abdenour have joined the club.

Losing Deniz Turuc was a big blow for the club after he joined Galatasaray, but that allowed them to sign Bernard Mensah from Atletico Madrid and he will be their key player this season. Mensah has the ability to play at a higher level if he can stay fit and find consistency.

Ankaragucu duo Michal Pazdan and Korcan Celikay have been receiving praise all week after their performance against Konyaspor and they will again have to be at their best and will be key to any success for Ankaragucu against Kayserispor.

Lets hope for a positive result!

The Round Ball in Ankara would also like to send our condolences to Coskun Basak who is the Social Media guy for Ankaragucu. His father Ahmet has sadly passed away.
By Nady - August 21, 2019