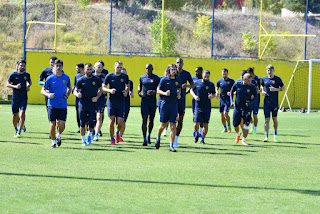 Another game is approaching us tomorrow night, and Ankaragucu will again go into the match with the board having failed to lift the transfer ban. As we approach the 2nd of September deadline, it is looking unlikely that the ban will be lifted which will mean almost certain relegation for the club.

With each passing day, the club are missing out on players they have spoken to about joining the club to other teams. Umar Aminu from Osmanlispor last night agreed a move to Rizespor, and was believed to be a key target for Ankaragucu.

Even if the ban is lifted on the last day, what caliber of player will Ankaragucu be left with? What decent player will have waited all this time and turned down offers from other clubs with no guarantee of signing with Ankaragucu?

Adama Traore and Kevin Bemanga are still training with the club and will almost certainly sign if the ban is lifted, but its looking like the club are missing out on other targets due to this inept management of the club.

We saw last weekend the effect of managements pricing strategy for match tickets and season tickets. Only 6,500 fans turned up for the Kayserispor match despite the capacity being 20,000. Had the pricing structure being set at an affordable amount there would have been a minimum of 15,000 at the game. Having done some sums, the club would have almost certainly have lost money with their stubbornness.

Ankaragucu travel to Kasimpasa tomorrow night and will again be the underdogs as they try and defy the odds with another upset. The team were so close to winning against Kayserispor last week but for a 93rd minute equaliser from Umut Bulut and also some dubious refereeing decisions again.

Kasimpasa have had a mixed start to the season and are still searching for their first win. A good 1-1 draw at home to Trabzonspor was followed up with a 4-1 defeat at Antalyaspor. The Istanbul side have lost some of their key players from last season including Mbaye Diagne who went to Galatasaray last year, while Trezeguet moved to Aston Villa for £9 Million in the Summer.

Yusuf Erdogan and Aytac Kara have joined Kasimpasa on free transfers from Bursaspor, while Mustafa Pektemek has signed from Besiktas. Foreign signings Mame Thiam and Jorge Fernandes have also joined the club.

One the the key players for Kasimpasa is Bengali Fode Koita, but unfortunately for Kasimpasa he has picked up another injury and looks like he will miss out. Koita is a forward player who plays out wide and on his day is a handful for any defender. He has been plagued by injuries over the last 2 years and it looks like he may be out for a spell again.

The success for Ankaragucu over their opening 2 games has been the defence. Michal Pazdan in particular has been outstanding and just won a call up to the Poland national team. He has formed an excellent partnership with Croatian Ante Kulusic. Thiago Pinto will almost certainly come back into the starting line up with Mehmet Sak putting in another poor performance last week.

The problem for Ankaragucu in attack is that even though Ilhan Parlak and Aydin Karabulut have been very poor and ineffective, the team dont have other options unless they look at the youth players. Berke Gurbuz is one of the most promising young players but the manager doesnt think he is ready physically. Hasan Kaya came on last weekend and done ok so there might be a place in the starting line up for him.

Its going to take another huge effort for Ankaragucu and again there will be a large following of Ankaragucu fans. Lets hope the team can send them back to the Capital with a positive result.
By Nady - August 29, 2019