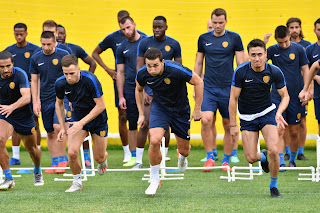 The Turkish Super Lig 2019/20 season kicks off this weekend, and Ankaragucu face a difficult away trip against Konyaspor on Sunday afternoon. To be honest, at this point any game will be difficult for Ankaragucu as Mehmet Yiginer and his management team have failed to lift the transfer ban which leaves the current team no where near good enough to compete at this level.

Last weekend Ankaragucu lost 2-0 against Genclerbirligi in the TSYD Cup and there was a severe lack of quality all over the pitch. Yiginer has also failed to appoint a manager which means Aykan Atik will be in charge as the season starts.

Yiginer talks a good game, as this week he again spoke of the team finishing in the Top 10 of the league if he can lift the transfer ban. He also said there is no guarantee we will lift the transfer ban due to interest rates with the bank, only 2 weeks after promising to lift the ban at the clubs elections.

So no Manager, no new transfers, no proper pre season preparations and the team have lost some of their key players including Altay Bayindir, Tyler Boyd, Hadi Sacko and Djedje from last season without any of them being replaced.

The one area of the team that the club has managed to retain is the back 4 of Kitsiou, Pazdan, Kulusic and Pinto. Worryingly they are way behind in pre season training, especially Pinto who only joined last week and hasnt played a single pre season game.

Dever Orgill and Tito Canteros will be  key players if Ankaragucu are to take anything from Konyaspor. The defence will need to be at their best and hope Canteros or Orgill will have the quality to create something special against the odds.

Konyaspor haven't made many changes in their squad over the summer from last seasons team. Key departures include Moryke Fofana and Adis Jahovic who both signed for Yeni Malatyaspor. While coming into the club is Riad Bajic who had a successful spell with the club 2 years ago and returns on loan from Udinese. Alper Uludug also signed on a free transfer from Genclerbirligi.

Konya under Kocaman will be a solid team difficult to beat, but again they lack quality in the final 3rd apart from Omer Ali Sahiner and Riad Bajic. The longer Ankaragucu can keep the score level and frustrate them, they may have a chance of returning to Ankara with a point, but it will be a massive ask.

An example of those struggles in attack for Konya is the 5 pre season games played scoring only 1 goal. At the other end they conceded 3 goals in those 5 games against the likes of Alanyaspor, FC Twente, Go Ahead Eagles and Eskisehirspor.

Konyaspor won the head to head last season between the two clubs winning 2-0 in Konya and a 0-0 draw in Ankara. Hopefully we can grab a 0-0 on Sunday night. We will have all the updates on our twitter page as the game kicks off at 15:15pm Turkish time.
By Nady - August 15, 2019