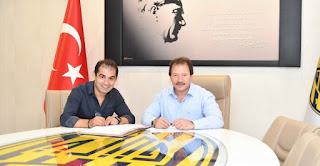 Mehmet Yiginer failed to lift the transfer ban before Monday nights transfer deadline, much to the anger of the Ankaragucu support who have been lied to and let down again. When Murat Agcabag was running for the Presidential elections at the club earlier this summer, Mehmet promised that he would lift the ban and bring in 7-8 new players.

Instead, Ankaragucu are the only club in the Super Lig who haven't signed any players and have a transfer ban in place. Adama Traore and Kevin Bemanga along with all the players the club had agreed deals with in principle, have been let down, and again its damaging for the reputation and image of the club.

Ankaragucu have now registered Oscar Scarione and Mahmut Akan who were both with the club last season and will join up with the rest of the squad. Neither of them will have any impact on the team or are of the required standard.

To make things worse, Mehmet Yiginer has now appointed Metin Diyadin as manager, another Turkish coach who has bounced from club to club and doesnt have a great reputation in the game. His last spell was with Giresunspor last season.

Unfortunately we have no good news to report!
By Nady - September 04, 2019