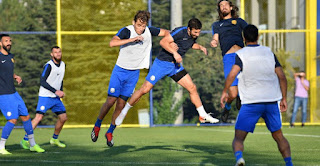 Ankaragücü face a mountain of a task tomorrow night as they travel to Istanbul for the match against Fenerbahce looking to restore a bit of pride after last weeks disastrous display. Unfortunately for Ankaragücü there isn’t much more that Metin Diyadin can do in terms of changing the personel as the team don’t have any other options apart from youth players.

Throwing youngsters into the team for an away match against Fenerbahce wouldn’t be ideal at the best of times, never mind as part of a team who are low in confidence and struggling for large periods of matches. That said, I’m a big believer in giving youth a chance as they can bring enthusiasm to the team and give everyone lose around them a lift.

The back 4 of Kitsiou, Kulusic, Pazdan and Pinto have all played a huge part in the teams decent start to the season considering everything that has went on. But as predicted even they looked dead on their feet last week.

Sedat Agcay is 37 years old and it’s hard to criticise him as he has given his all for the team any time he plays. But he has started every game, and bringing in fresh legs such as Ender Aygoren might be a better option alongside Moke and Canteros in the middle of the park.

Aydin Karabulut was booed throughout the game last week with Yeni Malatyaspor after another disappointing performance. Personally I thought it was harsh as he did work hard but just lacked any quality. Ilhan Parlak falls under the same bracket. Sixteen year old Berke Gurbuz is one of the most talented youngsters in the youth team and there are calls from the fans for his inclusion in the team.

Metin Diyadin claimed this morning that some of the players aren’t in a good frame of mind and won’t be included in the team tomorrow. Hardly surprising when you don’t pay the players or staff and also lie to them. This is the responsibility of Mehmet Yiginer and the management team.

Fenerbahce aren’t as strong as they were in previous years and come off one of the worst seasons in the clubs history. They do look in better shape than last season and have made a couple of good signings in Ferdi Karioglu, Max Kruse and the brilliant Kosovan and former Rizespor striker Vedat Muriqi.

They currently sit 3rd in the league 5 points behind leaders Alanyaspor and manager Ersun Yanal will be hoping for no slip ups against his former team.

Former Ankaragücü keeper Altay Bayindir has had a good start to his Fenerbahce career apart from his performance last week in their 3-1 defeat at Alanyaspor. He will be hoping to bounce back from that game with a clean sheet against his former team.

Last season Ankaragücü won the head to head between the two sides with a 3-1 win in Kadikoy and a 1-1 draw in Ankara.

If Ankaragücü are to take anything from tomorrow nights game they will need another defensiveness masterclass and some good luck which never seems to be on the teams side. We can only live in hope.