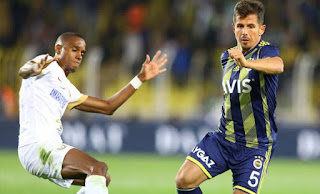 Ankaragücü put up a spirited performance in Istanbul and were unlucky to come away empty handed thanks to some awful refereeing decisions in the 2-1 defeat at Fenerbahce.

Ankaragücü made two changes with Cebrail replacing the suspended Kitsiou and Faty coming in for Aydin as Metin Diyadin looked for a more solid line up in midfield.

The team started the match brightly as they looked to press high up he pitch and put the Fenerbahce defence under pressure and take advantage of their lack of pace.

Deniz had the first chance of the match for Fenerbahce on the 2nd minute but he shot well wide. At the other end Dever Orgill won the ball off Zanka before shooting from 25 yards but former Ankaragücü Goalkeeper Altay Bayindir saved easily.

Ten minutes later Ankaragücü won the ball in the middle of the park and Sedat played a through ball for Orgill who used his speed to get past Zanka before brilliantly finishing past Altay to make it 1-0 Ankaragücü and send the travelling support wild. A great start for the team and thouraghly deserved.

Then came the first of many controversial refereeing decisions when Ozan Tufan sliced his shot well wide of the post the referee somehow pointed for a corner much to the dismay of Michal Pazdan and even Ozan looked surprised. From the resulting corner Korcan made a big mistake as he tried to punch the ball and missed, the ball fell to Zanka who placed the ball high into the net to make it 1-1.

The referee continued to make some strange decisions when Cebrail was fouled but the linesman gave the foul against him, and when Orgill won the ball in the middle of the park and was through on goal but referee pulled it back for a free kick to Fenerbahce. Replays showed he got both wrong. And then there was the decision when Ozan practically stopped the ball from going out of play with his hand right in front of the linesman who allowed him to play on. It’s decisions like these that make you wonder is the standard that bad in Turkey, or is there something more sinister going on.

Max Kruse and Vedat Muriqi were showing their quality and causing Ankaragücü problems and Kruse had a couple of good chances but saw both his efforts to just past the post.

Fenerbahce started the 2nd half well and Muriqi  was again causing problems as he played in a great ball for Tolga who somehow fired over from 5 yards. A minute later Ozan played in Kruse who saw his shot brilliantly saved by Korcan.

At the other end substitute Hasan Kaya put in a great ball for Ilhan who only had the keeper to beat but he headed the ball high and wide and again was a passenger for the full match.

Deniz and Tolga had chances to give Fenerbahce the lead but again we’re off target as Ankaragücü were holding on. But then came the 2nd goal, as Moke gave the ball away in midfield Max Kruse burst into the box before setting up Muriqi who made no mistake at the back post as he made it 2-1 Fenerbahce.

Deniz had another long range effort saved by Korcan before Ankaragücü had a 5 minute spell of waves of attack on the Fenerbahce goal. Dever Orgill was put through on goal by Pazdan and just as he looked to level the match Ozan Tufan somehow got back to block his shot with a brilliant last ditch challenge. A minute later Canteros saw his shot from just outside the box brilliantly saved by Altay.

From the resulting corner Sedat watched his shot go inches wide of the post and it looked like it wouldn’t be Ankaragücü night. Fenerbahce had 1 last chance as Tolga saw his shot saved by Korcan in injury time.

Ankaragücü will be disappointed that they come away empty handed but they can hold their heads high with the performance they put in considering everything that is going on at the club. Next up is the Ankara derby with Genclerbirligi next weekend!
By Nady - September 22, 2019