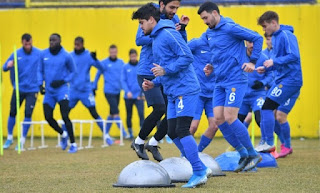 Ankaragücü host fellow relegation candidates Kasimpasa tomorrow afternoon in a 6 pointer and must win match if the team want to avoid the drop. The club were given a massive boost yesterday with 15 new players on transfer deadline day and the fans are eager to see the new faces in action starting with tomorrow’s game at Eryaman.

Mustafa Resit Akcay will take control of the team for his first match after he was appointed the clubs new manager midweek. It will be interesting to see how the team lines up and what system he will play with so many new players.

Although the new players will give Ankaragücü the chance of avoiding the drop, it’s always difficult when you sign so many players from different countries and try and get them to gel and adapt quickly. Unfortunately they won’t get time to settle and will need to hit the ground running. Mustafa Kaplan was successful last January when he also brought in multiple players on the last day of the window.

Despite playing the first half of the season with a transfer ban and the weakest squad in the Super Lig, Ankaragücü managed to keep their relegation hopes alive with spirited performances each week and every player worked their socks off for the jersey. If the new players continue that same work rate and effort then the team have a great chance of staying up.

Thiago Pinto, Michal Pazdan, Stelios Kitsiou, Ante Kulusic and Dever Orgill will also be boosted with the arrival of new players as the first 4 in particular have had good seasons and don’t deserve to be playing at the foot of the table.

Kasimpasa will be hoping they can come to the Capital and take all 3 points back to Istanbul. They have the quality in attack with Ricardo Quaresma, Bengali Fode Koita and Mamadou Thiam but struggle defensively and concede a lot of goals.

Ankaragücü won 1-0 the last time the two sides met earlier in the season and will be hoping to complete the double tomorrow afternoon.

Let’s hope we are reporting 3 points tomorrow for Ankaragücü and the start of a winning run as we look to avoid relegation.
By Nady - February 01, 2020