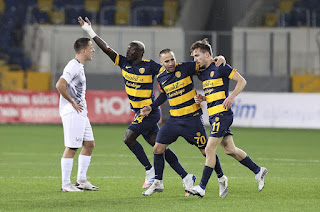 You have to go back to 25th August for the last time Ankaragücü won a game in the Turkish Super Lig with a 2-1 win at Goztepe in last seasons campaign.

Ankaragücü got off to a great start when Saba scored his first goal in 9 months when Pinto played a long through ball, Sehic came out of his goal and got into a mix up with Ugur, and Saba managed to capitalise as he lobbed Sehic from 25 yards and put Ankaragücü into the lead after 15 minutes.

Konyaspor were controlling the early stages with Ankaragücü struggling to keep the ball and they drew level on the 28th minute. Bolingi lunged for the ball in the box and brought down Milosevic and the referee pointed to the spot. Up stepped Uğur to make it 1-1 with a well taken penalty.

Ten minutes later Konyaspor took the lead with more poor defending and Milosevic beat Freidrich at his near post to make it 2-1. Freidrich will be disappointed that he never saved the effort as he was in a good position. Pinto and Bolingi also sleeping and lost the man at the back post.

A couple of minutes later Ankaragücü almost equalised but Endri saw his cross go just wide as a Konyaspor player got the final touch. Two minutes later Bolingi hit the bar from a header just before half time.

Ankaragücü got off to an excellent start in the second half when Torgeir Borven headed the team level after a brilliant cross from Stelios Kitsiou to make it 2-2. Kitsiou was back to his best and drove the team forward at every opportunity.

Konyaspor were causing all sorts of problems for Ankaragücü down the left hand side with Pinto and Bolingi struggling defensively. Skubic nearly took advantage but for a good save from Freidrich. Hurtado had a chance down the same side minutes later but dragged his shot wide.

Konya went back into the lead on the 70th minute and it was that left hand side again. A long cross ball at the back post where Bolingi left Skubic unmarked who headed over Fredrich to make it 2-3.

Then came the turning point in the match as Mustafa Dalci brought Paintsil and Emre Gural on. Just 2 minutes later a brilliant move involving Emre and Saba who set up Paintsil and the Ghanaian forward scored his 3rd goal of the season to draw level.

Minutes later Bolingi had the chance to win the game but Sehic made a good save. Just when it looked like we were heading for a draw, Saba tried to beat his man in the box and Uğur handled the ball. Referee checked VAR and awarded the penalty. Up stepped Emre Gural to place the ball into the back of the net and make it 4-3 Ankaragücü with only minutes to play.

There was enough time for Bolingi who had one of the worst performances you will see from a professional footballer to be red carded for dissent and a second booking. His usual laughing is the reaction you would expect to see from someone struggling with discipline problems.

So a brilliant first win of the season for Ankaragücü with a lot of positives especially the performances of Saba Lobjanidze and Stelios Kitsiou. But also the difference Paintsil and Emre Gural both made when they came on, as well as youth product Ender Aygoren who also played well when he came on.

The negatives are the defence again looked all over the place with neither Atakan or Sarlija impressing while Pinto struggled defensively and was given no support from Bolingi.

Ankaragücü now face Hatayspor on Tuesday afternoon and it’s another must win match before the derby against Genclerbirligi next week.