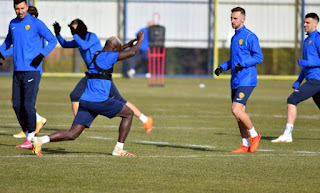 Its been another turbulent week for Ankaragucu and sadly its all related to off field issues. Firstly the club will continue with Mustafa Dalci as manager despite another horror showing last week and no sign of improvement, which is expected when you look at Dalci's CV.

Faruk Koca was scheduled to give an interview earlier this week and update fans on current issues and future plans at the club, but that was canceled. Four players have tested positive for Covid-19 again raising questions of discipline and leadership within the club, and Alper Potuk has been dismissed from the squad and removed as club captain due to disciplinary issues along with another couple of unnamed players.

The lack of discipline isnt a surprise either as its been evident for a long time and the failure to hire a good coach or Sporting Director has led to these issues. The appointment of Alper Potuk as captain in the first place was a strange decision. Both Stelios Kitsiou and Michal Pazdan had earned the captaincy but the club decided to go with Alper, who has looked disinterested since the day he signed and couldn't even do the minimum of staying fit or complete 90 minutes.

Next up for Ankaragucu is a home match tomorrow night against high flying Konyaspor who currently sit 7th in the table under former Ankaragucu coach Ismail Kartal. Konyaspor are always well organised and hard to beat, but have in the past come under criticism for lack of goals in attack.

Ismail Kartal done a fantastic job as Ankaragucu boss, guiding them to the Turkish Super Lig and then the top half of the table before he resigned after a clash with Mehmet Yiginer and the Ankaragucu management team.

Despite being without a number of key players including Faruk Miya, Sokol Cikalleshi, Samuel Edouk and Musa Cagiran, Konya won 2-0 against Erzerumspor last weekend and will be looking to build on that with a win in the Turkish Capital.

Its unclear what the Ankaragucu team will look like at the moment with Alper dismissed from the squad along with the other unnamed players, and the 4 who have Covid. There should be no place in the starting team for Jonathan Bolingi or Saba Lobjanidze but they will both likely start. Lobjanidze has been involved in every game this season and registered 0 goals and only 1 assist. He again had numerous opportunities last week and failed with them all.

Its hard to make a case for anyone to start in this Ankaragucu team as no one has stood out or has pass marks for their performances this season. Its another must win match for Ankaragucu as time is now running out, sadly it looks extremely unlikely that they will take anything from this match with all the distractions off field now adding to the poor performances on the pitch.