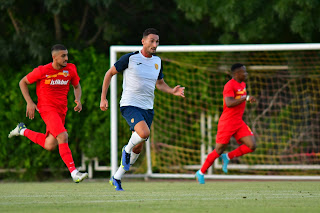 Ankaragücü got their pre season campaign underway with a 2-2 draw with Kayserispor thanks to goals from Atakan Cankaya and Federico Macheda.

The starting line up drew a lot of criticism from the Ankaragücü support due to the defence and midfield. We are 3 weeks from the Super Lig campaign starting and we have a defence that is weaker than what it was in Lig 1.

Those who were at the game commented the defence was a problem during the full game. Also Dalci deciding to play Sahverdi and Abdullah in the same midfield. Both are very slow players who don’t have the fitness levels to play at high intensity and cover a lot of ground. He also decided to go with Eren up front who is another who really struggles to run or move.

Kayserispor took an early lead through Thiam after a 5th minute penalty. But Ankaragücü drew level not long after though Atakan Cankaya. Unfortunately Atakan had to leave the game with an injury and was replaced with incredibly a player even slower than Abdullah and Sahverdi as Alperen Babacan came on.

Kayserispor regained the lead on the 76th minute through Cardoso but again Ankaragücü hit back with Macheda scoring on his debut.