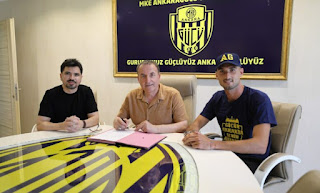 Ankaragucu completed the signing of former Manchester United striker Federico Macheda from Panathanikos. The Italian forward will be paid a reported 850K euros per year and will join former team mates Tasos and Zahid in the Turkish Capital.

Macheda was one of the most highly rated young strikers in Europe when he broke through at Manchester United as a teenager but has failed to live up to the early promise. Failed moves to Doncaster, Cardiff, Novara were followed up with a mixed time in Greece with Panathanikos.

Ankaragucu fans will be hoping Macheda can be a success for the amount of money he will receive and we wish him all the best.

The club also announced the signing of young Kocaelispor striker Mervan Yigit who is highly rated and will push for his place in the squad.