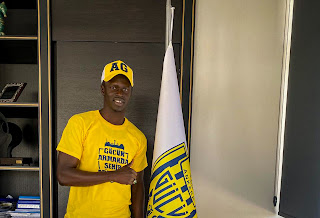 Ankaragücü made their latest summer addition today as they finally announced the 350,000 euro signing of  Senegalese midfielder Lamine Diack from Fenerbahce. The 21 year old starred for Tuzlaspor in Lig 1 last season and impressed enough for Fenerbahce to have first option on his signing.

Faruk Koca managed to secure the deal from Ali Koc as they agreed to the fee mentioned above plus a sell on percentage. Diack has signed a 3+1 year deal with Ankaragücü and will be hoping to make that holding midfield position his own.

Athletic, fast, strong and a player who can get up and down the pitch, Diack is also a tidy player that has room for improvement on the technical side of the game.

It’s an exciting signing for Ankaragücü as the club don’t often sign younger players with that kind of potential. Hopefully we see more of these type of signings in the future.