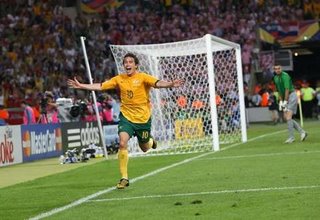 I feel as if we have won the World Cup.

A pulsating 2-2 draw that we definately deserved send us through and sets up a mouthwatering last 16 match against the blue Azzurri.

Aussie Guus Hiddink would definately be knighted if we still gave away those honours but for a little while last night I thought he might have been lynched for his strange decision to swap goalkeeping duties from Mark Schwarzer for AC Milan reserve Zeljko Kalac.

Schwarzer hasn't had the best tournament so far but to change goalkeepers in the middle of the tournament is one hell of a strange decision.

As for Kalac, he is the reserve keeper for Milan and has only played a few games this season and against Greece a few weeks ago (it seems like eons ago) he didn't look too great.

Last night though was a nadir. Can't really blame him for Croatia's first goal from a beautifully taken free kick after two minutes but the second one was something he will be replaying in his head for a damn long time. It was a long range effort from Croatia and it should have been a regulation take. Instead it bobbled out of his arms and dribbled into the goal.

I thought it was all over but Harry Kewell luckily got an equaliser not long after.

At 2-2 with just a few minutes left we should have been shutting them out but then Kalac almost gave us another heart attack when he meekly threw the ball to a Croatian forward. Luckily the defence cleaned it up.

The referee Graham Poll will almost definately be going home after an absolutely inept performance. Our first penalty was a correct decision: handball by Tomas. But where was he when Viduka was rugby tackled in the box or when Tomas rose above the pack to knock the ball out with his hand... again.

Then we had the farce of the Australian-born defender Josip Simunic being given three, yes three, yellow cards before he was finally given his marching orders by Poll.

We got one decision our way though as Kewell was offside when he scored the equaliser.

If anyone thinks I'm biased about my thoughts on Poll's performance just check out this article in the Guardian. A snippet:

"England's footballers may not have yet made their mark on this year's World Cup but last night Graham Poll, the country's sole referee in Germany, certainly did with a performance that may go down as one of the most error-strewn in the tournament's history."

Onto some positives, finally.

The Socceroos went for it. They played for the win and controlled vast portions of the match. All they have to do is get in a few more shots from just outside the box. In some ways they played like they did against Japan, as if they wanted to walk the ball into the goal. "Have a go ya mug".

Once again it was a full 90 minutes performance. This was a physically (and mentally) draining match but the Aussies didn't let up. The spirit on display was real, it was the sort of stuff that us Aussies are used to from out cricket and rugby players but last night the round ball boys proved that they too are made from granite.

As I said before, I'm over the moon. Italy next up and no doubt we will be off to the Red Lion Club again.

Many many thanks are in order for the Red Lion Club boys (Rob and Peter) for letting us watch the Croatia - Australia match and keeping the club open for an extra hour (it was not possible to watch the match on Turkish television, the rights holder Kanal 1 decided to show the other match between Japan and Brazil... idiots).

Many many thanks also to Vedat for keeping me well supplied in the Efes department.

But in all my joy I also had a tinge of sadness for our own Zagreb Kanka watching the match from a hot tub in the Croatian capital. In fact, Zagreb Kanka was the main gossip item of the night. You are becoming a legend in Ankara my dear Zagreb Kanka. By the way, Smart Arse Yankee Kanka was supporting your lot, but was smart enough to actually wear an Aussie shirt so as not to get beaten up.

Now on to the next round. Can we beat Italy? Anything is possible but I think I'm actually going to try and learn the words to our national anthem, they seem to be playing it quite a bit at the moment.